Ever the cheapskate, the SpartanNerd was shopping at the Goodwill, and…what…was…in…the…case??????? (The glass case at the front for “specialty items?”)

So I present my unboxing and review!

(Disclaimer.  I used a different camera this time, with some blurry results.  Sorry!)

Now for the back.

Anyone notice that this commander is a MOOSE? 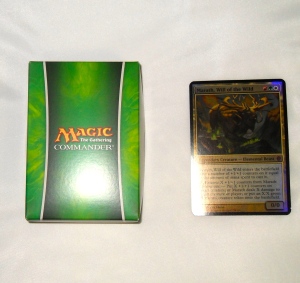 NATURE OF THE BEAST comes in a similar deckbox as the others in this set.  This time it is green, to highlight that this deck is aimed at green magic players.  (Not Martians.  People who play green magic, silly!)  When you remove the top of the box you get to see the main commander moose, Marath, Will of the Wild.  He is pretty good, having counters determined by the amount of mana spent to pay for him, and able to give those to someone else.

Now for a look at all three commander cards.  Yep.  Just like the other sets, this one has three also. 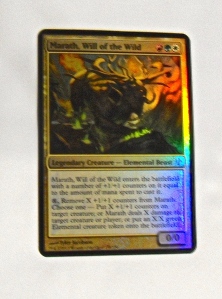 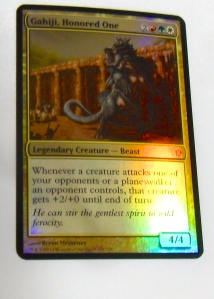 Of the three, I have only ever seen Mayael the Anima actually played before.  Competitive players like card draw, and green doesn’t get that much.  So that’s my theory why.

The other two, Marath Will of the Wild and Geiji Honored One both add to the Beast flavor of this deck…both can pump creatures.

So what else came with this deck?

Here’s a pic.  I don’t need to be reminded that I am a Planeswalker anymore, so I trashed that right away!

The pick also shows another paper, which is the “instruction manual” for the deck.  The most important thing here is the deck list, which I will reveal below.

First of all, there is a strong tribal vibe to this deck.  There are more Beast creatures than anything else.  Here is a picture of a select few.

Not only are they Beasts.  THEY ARE BEAST!!  And nearly every one has an ability that either has something to do with land or pumping someone else.

They’re not ALL beasts though.  Here are the other creatures.

These guys compliment the beasts pretty good.  They are all ust as expensive and all.  The least inspired of them seems to be the Archangel, who it is nice to see the classic art of.  However, it’s still just a plain old 5/5 flyer with vigilance.  Not really sure why she’s here, except that it caters to a certain style of fan. 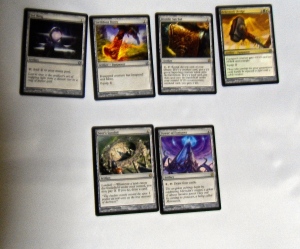 There are some good artifacts in this deck.  I am a fan of the colored artifact hammer thing here.  Of course we get the Sol ring, which I learned the hard way was banned in Modern…Hey.  It’s a great card.  Too great I guess.  Then there is the Swiftfoot boots.  An underpowered filler.  This is the kind of thing I groan about when I get it in a booster pack.  Yet every Commander deck in this set came with a copy of this card.  Why?

There are a lot of different kinds of land in this deck, but I thought I would share my favorite standouts here.

Mosswort Bridge is a “Hideaway Land.”  I had none of these before!  It’s cool!  Basically you get to exile some cards, and then you can play them much cheaper.  A great advantage for this deck especially, with its really high mana curve.  The Contested Cliffs card is aimed at that tribal beast flavor, forcing a fight between a one of your beasts and someone else’s probably weaker creature.

Blah Blah Blah.  Yes there are instants, sorceries, and enchantments.  But lets get down and see how the first match went.

I played the first match against three family members, each of which were playing one of the other decks unmodified, except for the Nekuzar the Mind Razer deck.  (The person playing this deck really wasn’t into it today anyway.)

I used Marath, but never casted him.  I did get to cast Mayael the Anima, twiche actually…(she was sent back to my hand.)  On about turn twelve, the Power Hungry deck was finishing everyone off…I mean, it’s hard to beat that big flyer, no matter how much “trample” you can get from your beasts.

Which confirms why my Magic color of choice is BLACK and not GREEN.  I disagree with that philosophy, to sort of quote Gideon.

Regardless, I got a great value for this deck.  I’m sure I will have many more wins to it.  But for now, I am putting it with the other decks, I HAVE A COMPLETE COLLECTION!

What do you rate it?  Let me know by sending a comment, oh Hub City Geeks!