It is GREAT to be a SpartanNerd.  And I am so proud to have offspring following in my footsteps.  As great of a Masters of the Universe fan as I am, the SpartanKid is every bit as much of a Mega-Man fan!  (I’d say he is a “mega-fan!”)

Last year for Christmas, he got “D-Arts Mega-Man X.”  I predicted that he would lose the pieces, etc.  Nope.  He kept up with EVERY ONE.  Great!  So he asked for another toy like it, “Black Zero.”  His aunt got it for him.  I didn’t review Mega-Man X, (th blog was just getting on its feet), but Black Zero is every bit the quality of Mega-Man X.  While I don’t know as much about Mega-Man as he does, I am not entirely ignorant.  (I have made it to the end of Mega-Man 2, but never beaten it.)  On the other hand, I know very little about Mega-Man X and related stuff.  It is apparently its own thing.

The SpartanKid couldn’t wait to open it, so I quickly snapped pictures of the packaging.  Sorry for the blurriness.

The front and the back of the box is entirely in Japanese, pretty much, except for the titles.  (That warning is probably required to be in English.  Ages 15 and up…The SpartanKid is only 9!)

The sides of the box also feature great art.

Call me old fashioned, but with that pony tail, I tend to think this figure represents a female.  (It also has circles on it’s chest, you know where…)  But the SpartanKid insists that Black Zero is a male.  Cool.  Whatever.  It’s the modern age…

Like I said, he played with it for awhile before I got to take review pictures.  But all the pieces are still here.  Here is Black Zero in his regular pose, showing off his buster cannon.  Black Zero’s main weapon is evidently swords, however.  (CORRECTION: Z-Saber)

Here are all of the accessories…(that weren’t currently on the figure.)  It is notable that there are three faces, another forearm with attachable buster cannon end, four extra hands of various grip, and two swords, one pointy and the other more blunt.  (more of a lightsaber, I suppose.) 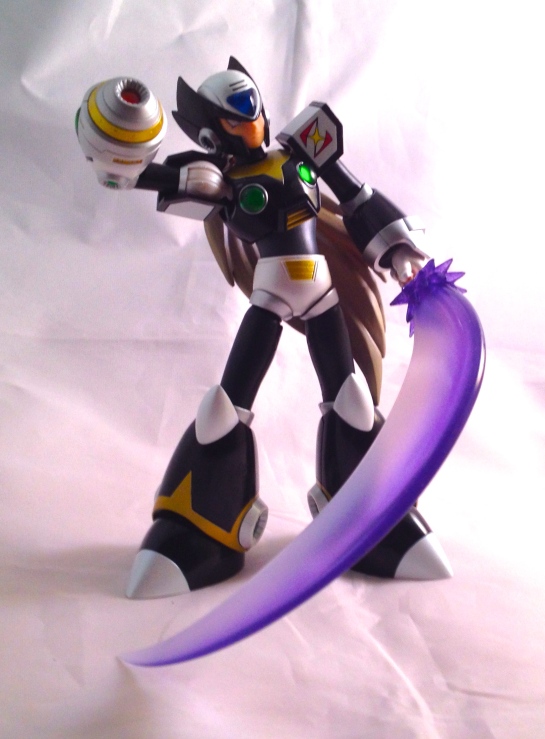 Then there is this thing. Which I thought of as a scimitar.  But it isn’t.  It is a beam saber in motion!  (Don’t I know anything?)

The SpartanKid also got the MegaMan X collection of video games for the PS2.  When I saw him playing this, I realized that he was right.  Whenever a character in that game uses a sword, you get this look.

Here is a different hand, holding the pointy sword.

You can also take the parts from Mega-Man X, and apply them to Black Zero.  Here he is using the Buster shots from D-Arts Mega-Man X.

Black zero looks cool with different faces.  And it isn’t too hard to switch them out. 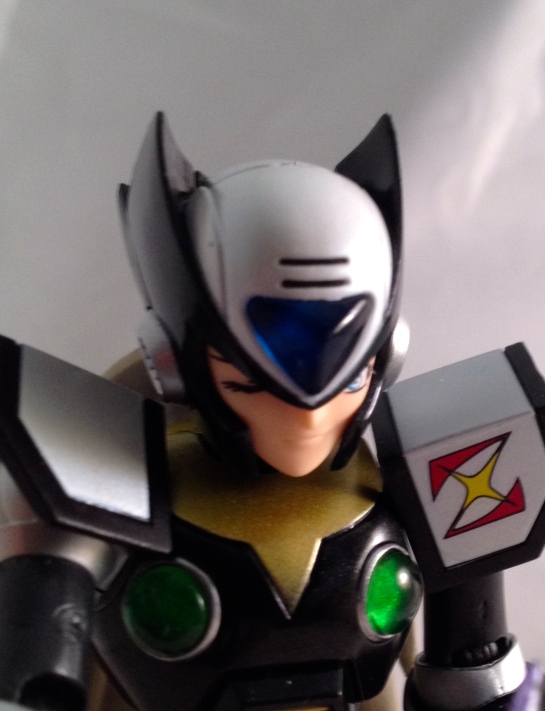 I only have one complaint about this figure.  It seems like Mega-Man X also had the same problem at first.  But it is important for me to mention for this review.

Notice the little peg where the hand attaches to the figure.  This is a peg with two ball-joint ends.  This peg should stay in the forearm…but it doesn’t.  Do you know how hard it is to get into the hand?  How about back into the forearm?  And once it fired out like a bullet across the room.  We were lucky to find it.  If we HAD lost it, how difficult would it be to replace?

The sculpt is all you would expect from a $60+ adult collectible figure.  The interchangeable parts are very nice.  He is a great representation of what is in the game.  The SpartanKid has had a ton of fun with him so far.  He goes nice with the other D-Arts Mega-Man figure.

There is an issue with the peg on his left arm.  A potentially nasty issue if that peg gets lost.  So I have to take a point off for that.

So the SpartanNerd gives D-Arts Mega-Man X “Black Zero” a 4/5.

Do you agree?  Let me know in the comments!