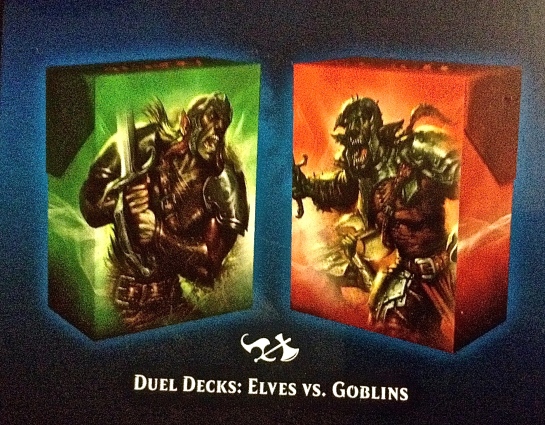 So far, I have reviewed Garruk vs. Liliana and Jace vs. Chandra.  I thought I would save Divine vs Demonic for last, because that is the one that has the “money cards” in it that people were hotly interested in, and besides that, I have other reasons…(I will reveal them in time!)

So for now, you get my review of Elves vs. Goblins.  If I’m not mistaken, this was the first ever Dual Decks product from the Wizards of the Coast.

I prefer unboxing these decks on video, rather than taking pictures of the cards.  This is a true unboxing…what you will see when you open the package.

Both decks come with a beautiful foil deckbox, that unfortunately has the cardboard catch that tears up after about the third opening.  I vow to put velcro on these!

And the tokens were boxed in the Elves deckbox.  (The goblin tokens are with the elf tokens.)  I will say that the Elf Tokens are a little disturbing…

Other than this, the cards have an “old school” aesthetic.  Sure, they are reprinted in modern frames.  But the art is of that older style you find when you open old packs or look through piles of bulk cards.

As before, featured rare cards are on the top.

Siege Gang Commander gets you three 1/1 goblin chumps on the battlefield.

Clickslither is one of the few cards in the deck that isn’t a Goblin.  Just the same, it’s ability…Sacrifice a Goblin to give him +2/+2…makes this THE CARD to fear in this deck when things are going well for you.

Ib Halfheart, Goblin Tactician can be insane.  Block something big with little chump goblins, and then sacrifice them on the way to the graveyard to burn whatever was blocked for four damage.  You can remove most anything this way!  But that’s not all…Ib lets you get more chumps if you sacrifice mountains.  Late game, when you don’t need all that Mana…(this deck isn’t a mana hungry deck), you can just outright win.  And there is a lot of synergy with Siege Gang and Clickslither

Then there’s Skirk Fire Marshall.  My issue with Skirk is that you sacrifice so many goblins all the time, you might not have five goblins to tap and burn the opponent for 10 damage.  He’s a fun threat, though, if the circumstances are right.

The rest of the cards are variations on the theme of “Sacrifice me, or somebody else…do something bad to the opponent.”  But the cards are carefully chosen so that they balance well against the elf deck.  For instance, Gempalm Incinerator has a cycle ability.  There is a gempalm card in the elf deck.  There is a “goblin lord.”  (You folks who don’t know, “lords” in magic are cards that give other similar cards +1/+1.  Lords usually have some other upside as well.)  In this case, Goblin Warchief give your goblins haste.  This is the kind of card you want in your opening hand.

The only thing I am sort of unclear on in this deck, and the other is “tribal instant” or “tribal enchantment.”  Are there special “tribal” rules for these cards?  Sure, these are tribal decks.  But what do these special spells do that they can’t do in a non-tribal deck.  I guess I will look that up sometime.  The only thing I can figure is a card or two says “whenever you cast a Goblin spell this turn,” or something like that.  There would be synergy.

As a rule, I haven’t modified any of these decks.  Who would I “fire” from the goblin deck?  Skirk Drill Sergeant.  Usually, when I try and trigger his ability, which is costly, I might add, I get what I don’t want.  Clickslither winds up in the graveyard, or something else.  And there is almost no re-animation in this red deck.

As before, first the rares.

Ambush Commander is a little odd, because it is a sac outlet for elves.  Still, it is a way of suddenly finding the tribal power the deck needs by making all of the forests into elves.

Allosaurus Rider is the card I fear.  It is the kind of card we ALL should fear.  What should be every bit of a seven drop, can be had as early as turn 1, and be a 2/2!  And then grows bigger the more forests you play.  It is actually harder to flip a Delver of Secrets!  I would say that this card is the matchup for Clickslither in the other deck.  But you know they won’t be out at the same time…

Remember Skirk Fire Marshall?  Well Voice of the Woods is the elf version.  You tap five elves, and you get a 7/7 Elemental.

The rest of the elves are all chumps, with some kind of ability that enhances other elves, or uses them as a resource, or what have you.  “The elf lord” to look for in the early game is Imperious Perfect.  And what elf deck would be complete without Llannowar Elves?

Literally, in just about every way, the elf deck matches the goblin deck.  The Wizards made their entry Dual Deck a real statement.  The only thing the Elves have that the Goblins don’t have counterparts to are the artifact cards.

By now, I have had tons of experience with both decks.  I have only played Divine vs. Demonic more.  These decks are VERY EVENLY MATCHED.  I can’t stress that enough.  I have been playing Magic for awhile now, and could count on one hand how many “ties” happened where both teams killed each other simultaneously.  When you play these, it is almost like playing a speedy game of Commander, Not because of the singletons, but because each side plays offense or defense, and there are lots of card interactions.

Both decks are very tribal, but also exemplify the philosophy of their color.  The goblins sacrifice themselves or others to burn  the opponent out.  The Elves do things to make big creatures, or a swarm of creatures that over-runs the opponent.

So I am going to call this a tie.  It is what it is.  And it is always fun. If you want a good lengthy game of MTG, that uses lots of card synergy, then you should play Elves vs. Goblins.

SPARTANNERD’S RATING OF ELVES VS GOBLINS.

I have to give both decks a 5/5.  The only complaint I have about the decks are the tokens.  Both sets look kind of creepy.  In an oddly sexually specific way.  Your mind doesn’t even have to be in the gutter to think so.  My oldest child noticed what I am talking about, but the younger one doesn’t see anything odd.

So I rate the Elves vs. Goblins Dual Deck from the Dual Decks Anthology 5/5.

Do you agree?  Let me know in the comments!