I have read so many comics that NOTHING seems to happen in.  This hasn’t been the case with He-Man!  Each issue brings barbaric fighting, sci-fi goodness, high-fantasy magic, and the struggle for good to defeat evil.  The writers are giving us a great comic, with all-stops out!

And while this epic confrontation wages, Skeletor has the power of Grayskull, and is making his own weapon out of Hordak’s sword and the Havoc staff at the Forge of Grayskull.  As he hammers away, planets are exploding out in the universe!

(The Forge of Grayskull is a repetitively used plot device in this series.  The writers have tied the power He-Man has to the forge, because it’s fire comes from the Star Seed…us long time fans know this as “the spark of creation.”)

Planets exploding…this strikes another nerve, as I just left my second viewing of Star Wars: The Force Awakens.

It is also remarked that the souls of all of the people killed as these worlds explode are feeding Skeletor’s power.  Pretty scary.

Remember that scene where He-Man was Naked?  Evidently, the writers were showing us He-Man stripped down in his psyche.  The next scene shows what is going on in Adam’s head.

We saw this scene before, but in that scene Keldor encouraged Adam.  We are seeing the memory corrupted by King Hssss.  And Adam doesn’t appear consistent in his mind…notice how as he fights, he suddenly was older and had the battle axe.

He continues to change…

And then is a psychological He-Man.  The axe is significant.  The is the He-Man inside of Adam, and he doesn’t need the power of gray skull.

Adam encounters someone else in his mind as he goes deeper to protect his psyche from King Hsss.  His suppressed love for Teela is just at the top level of his sub-conscience.

And now for a HOLE IN THE PLOT.  Wasn’t Teela a blonde in this comic?  They even made a big deal about her dying her hair to red!

Adam’s memory of Teela tells him to fight with all he has to protect a deeply hidden but crucial memory.  A memory shielded from even himself…It is represented by this little rock thing.  But then under attack by Hsss, Adam drops it and it shatters.  And then we had to wait for Issue 12!

Issue 12 starts off with She-Ra fighting to get to Grayskull, and having a hard time slaying Skeletor’s Dark Riders…basically phantom skeleton warriors.

She figures it out by suddenly knowing “Sword to Shield!”  I didn’t think they would use She-Ra’s sword-transformations in this comic.  The sword became  basically a sharp ended force-field.  COOL!

I am missing some pictures and am too lazy to re-take (after seeing Star Wars until 12:30 last night.)  Something that happened off panel was Man-At-Arms planting a bomb in Tri-Clops visor while he was “talking too much”.  And so that explodes, killing Tri-Clops and blowing a hole in Castle Grayskull/Fright Zone’s shields.

And now back to what is going on in Adam’s head.  Adam is running towards the crashed Wind Raider…we saw this before…

The memory is of the event that was recorded in He-Man and the Masters of the Universe #19, which was sub-titled “Prelude to the Eternity War.”  This comic was a whole year ago!  And King Hsss is working hard to corrupt this memory…a memory so deep and yet so vital to who He-Man is.  In the memory, Adam as a child, taps into the power of gray skull in order to save Randor from death.  Apparently a hidden ability of the power of gray skull is the ability to control time.  And so, the word “eternity” makes sense.  The Sorceress and Zodac decided to allow Adam to briefly tap the power as a child to save Randor, so long as he “forgot” what he did, as well as how he did it.  That fundamental moment proves that Adam IS He-Man, with or without a power sword.

Man-At-Arms is apparently not dead after all, but seriously wounded in the chest.  As he comes around, he sees Adam having inner conflict, saying things that don’t make sense, etc.  And then he sees Adam grab the remnants of the power sword and cut himself open!

I always thought King Hsss devoured his victims like he did in the 200x cartoon.  Now we see how he does it for real…and it is SOOO much creepier.  Instead of swallowing them whole, (which kind of doesn’t make sense…) he goes into the body and consumes it from the inside.  All the while also consuming their psyche and becoming that person for real.  He is the Master of Dissssguisssse.

And before he took control of Adam he was Mendor…(I thought their must be something suspicious about Mendor…his name ends with an “-OR.”  Clearly he was a bad guy!) As Mendor, he treated all of the snake men, and caused them to be “seeded with his venom.”  Which apparently meant they would self destruct when he died.

In a matter of issues we have seen two entire armies wiped out…the Horde Troopers and the Snake Men.  Never say “nothing happened” in a Masters of the Universe comic!

The memory of Randor gives Adam some clarity.  But let’s remember, Adam is dying…he just cut himself open…

We interrupt that very important drama with even more important drama.  Skeletor outlines his evil plan to the world.  He has tapped the Star Seed.  She-Ra is down.  Hordak is conquered.  As the chosen one of Horokoth, Skeletor aims to destroy ALL life.  And then rule the chaos that comes after.

Finally we see the image of Skeletor transformed with the power of Grayskull.  It appears that as before, he is combined with the Havoc staff.  Or maybe I’m wrong about that.

And as he appears, in Adam’s final moments…

He taps into the power of Grayskull as the chosen one of both Serpos and Zoar!  It appears now that Adam is either re-born, or maybe healed.  And now he is a supercharged version of He-Man!  (We also saw some of this pre-viewed in the art book.

The art book seems to give us a few more hints of what’s to come.  But for now, I am perfectly happy with how things have gone!  This is the greatest Masters of the Universe story ever told!

Do I even need to bother giving them a 5/5?  I think my readers already know that!

This product is AMAZING!!!  I can’t recommend it enough!  I never purchased an art book before for myself, but the SpartanKid has Mega Man Star Force Official Complete Works.   I think that is fine…but the He-Man book blows that away!

(Many thanks to Daniel at the Tangled Web in Spartanburg South Carolina for giving me a discount!  What a great store!)

Obviously, I can’t just take a bunch of photos of each page.  (I wonder how long it would be until Dark Horse/Mattel sent me an order to take them down?)  Instead, I will summarize why I think this book is great, and include just a few pics.

The front and the back cover are the least spectacular parts of the book.  Why does DreamWorks have a credit?  Barely mentioned here is the Power and Honor Foundation, who owns/houses/curates the art!  (I believe Emiliano Santalucia and James Eatock have a lot to do with this organization.) 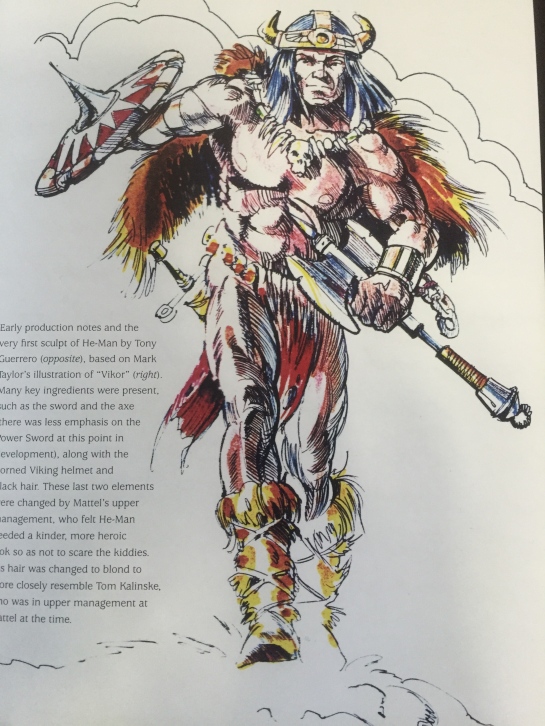 There are several document scans as well as scans of early work.  This book serves as a great visual documentary.  Most everyone has seen this image, that “Vikor” was eventually modeled after.  The original He-Man! 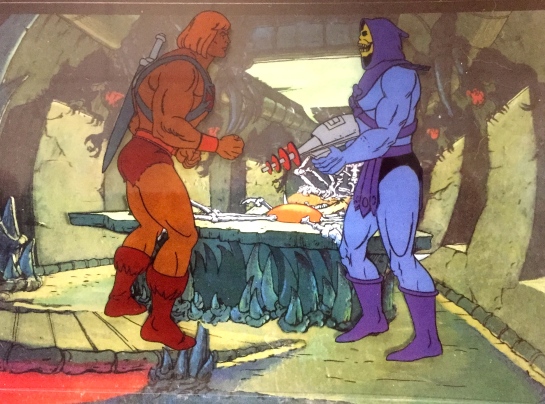 You get a piece of reproduction cell art!  And you can put the image over different Filiation backgrounds! 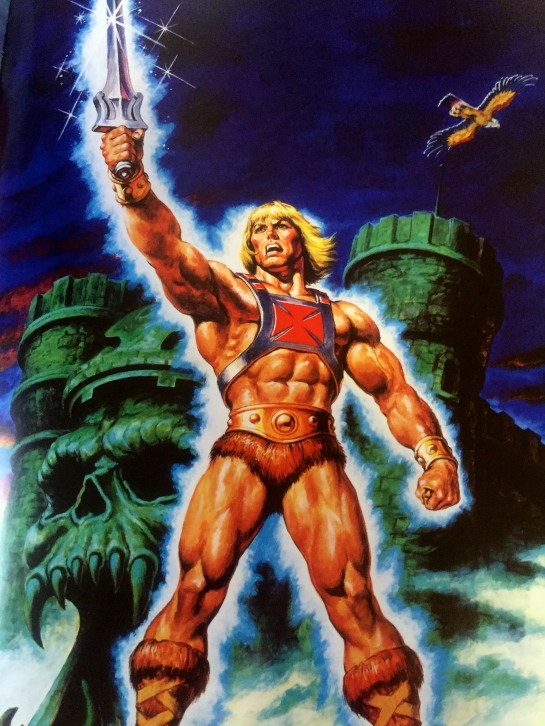 No one will ever deny that Earl Norem was the GREATEST MOTU ARTIST!  This book has several prints of Norem’s work.  This one is my LEAST favorite, and it is amazing!  The more I look at Norem;s work, the more details I notice!

Here is another Norem.  There are several pieces of movie art.  And that is surprising to me.  Rights to stuff that deals with that movie always seems to be a point of contention.

Unsurprising, there is lots of 200x art.  Here is Eternos Palace from the show.

I have this art card.  I really like it!  I think it came with a DVD or something.  I have had it taped to my office wall before. The art book lets you see it extra large!

The MOTUC Castle Grayskull Box art by Rudy Obrero is preserved here.  It folds out to reveal the entire MOTUC classics card back cross-sell art.  (Up to the point of printing, of course!)

Something I never thought I would own…the MOTUC maps!  Only Masters of the Universe Classics subscribers received these, or people who purchased certain products.  (Castle Grayskull comes to mind.)  Every map is presented in this book!

The book takes you all the way from Mark Taylor and Roger Sweet to the modern age of comics!  SpartanNerd readers know I love the new comics!  Here is one of the covers they presented in the book.  There are several other pieces of modern DC comics art as well!

The last part of the book was looking ahead, concept art, etc.  I wonder how much of this is DreamWorks.  (That is who is working on the current movie project, right?)  At least we already know that the gold plated Battle Cat armor is being used in He-Man and the Eternity War storyline.  But what about Skeletor at the bottom?

The book takes you on a grand trip through the history, present, and future of Masters of the Universe.  I neglected to show you…

An early Beast Man (too similar to Chewbacca)!

And oh so much more.  If you like Masters of the Universe, this is the book for you!

Can I say anything negative about the book?  I wish it had the full art of Norem’s He-Man and Skeletor’s epic fight, where Skeletor commands elephants and He-Man is riding a lion!  This is the first piece of art you see when you get past the gift-wrap print that is found on the hard-cover backing.  But it is partial.  (That is one of my favorite Earl Norem paintings!)

The other thing is…and maybe I’m wrong.  But the book is 400+ pages.  And the pages are HEAVY WEIGHT.  I am concerned that the book may fall apart over time with lots of use.

I give the Mattel/Dark Horse/Dreamworks He-Man and the Masters of the Universe Art Book a solid 5/5!  Hopefully the Power and Honor Foundation will be able to continue putting out books like this in the future!