My heart leapt.  Literally skipped.  I had gone into Big Lots the day before, hearing the news that MOTUC was showing up.  But none were on the shelf.  The manager informed me that they would probably appear on the truck that was coming overnight.  He was right!  And the first figure I saw floating on the shelf was ORKO!  Knowing the kinds of things I know, I knew that was a Two for One!  You got Adam as his “Secret Accessory!”  And marked $10!  Score!  I had to look hard to find others.  But I did.  (See previous post)

So let’s get down to it.  Of course tons of other folks have already done this.  But this is mine.  TAKE THAT, webhogs. 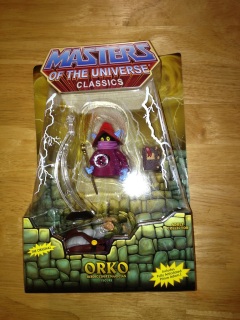 These two friends come in the standard MOTUC packaging, with the lightning bolts, and the ALL CAPS font.  From here you can see Orko, his wand, his flight stand, and his book os spells.  You can also see Prince Adam’s belly and arm.  I looked in the top, and saw that Adam comes with an alternate head.  I seemed to have forgotten this detail.  I was looking for the pink sword. 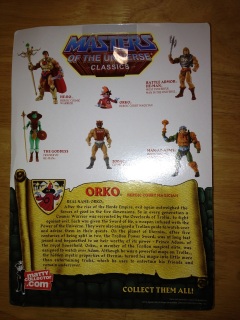 Here’s the back, and that “Oh so controversial” bio!  I mean, I don’t have strong feelings against it.  But some people think this story takes away from the jester that Orko is.  But everything here seems to be established fact if you are condensing Filmation and Mike Young stories, other than the bit about him being assigned to guide Zodac (or is it Zodak?)  Interesting, the Sword of He is Trollan in origin……

AND NOW BACK TO THE SHOW.

When I removed the outside package, I could see it all.  And Adam comes with TWO pink swords.  (One half sword and one whole sword.)  If you are reading this, I probably need not bore you with the details why.  But basically everyone that comes with a Sword of He gets this treatment, except Keldor, apparently.

Removing everything from the package took a lot of careful effort.  There were a ton of rubber bands.

So here’s Orko, all decked out for display.  I really dig the flight stand!  This is NOT the San Diego Comic Con exclusive version, that could turn invisible in water.  He can’t hardly hold the spell book.  HIs arms, elbows, and wrists are articulated.  His head can move behind the scarf.  The hat is non-removable.  (Unlike the vintage version)  The wand looks like the wand we saw on the cartoon.  (which one?  In my old age, it starts to run together)

This is hands down THE GREATEST ORKO EVER.   I had the vintage one as a kid.  I always thought him too big, considering his scale on the cartoon.  Then the 200x version had WAY TOO MUCH exaggerated detail for my taste.  Though I thoroughly enjoy that cartoon.

First things first.  Adam has the weakest ankles I have yet seen in MOTUC.  Shame on you, Mattel.  He can hardly stand up.  I had to perform surgery with clear fingernail polish.  He should have just been right.  His angles are so loose, I saw them wiggling around in the package.

After some fiddling, here he is standing with his sword aloft!  Adam’s shirt is non-removable.  Other than that, he is an exact repaint of He-Man.  Now for the alternate head.

This head is smiling.  I tried putting it on He-Man.  Besides maybe a slight different shade of skin color, they are exactly the same!

So here are my new acquisitions.  Not bad for a ten spot!  I’ll just have to cut back on a meal eating out I guess.

These two were always featured as friends.  I am glad to have them bundled together.  Overall, I am very satisfied with Orko.  He gets a 4/5, missing a mark because he can’t hold the book too good.  Adam gets 3/5.  He is an excellent figure, with great paint, and a beautifully sculpted extra head.  But his weak ankles really hurt his score.  What would you give him?  Let me know!

As I tirelessly remind anyone who reads this blog.  I’M A CHEAPSKATE.  Mostly out of responsibility and guilt, needing to spare luxuries sometimes to make the ends meet.  So what news caught this Tri-Clops’ eye?

So I made my way to the Big Box discount store.  And LOADED UP!  MOTUC figures for $10 a piece.  Even the giant figures!

I passed up on Faceless One (already have one), Molar/Skeletor (I have two Skeletors already and hate Molar.)

This score seems exceptionally huge because of two things.  (1) At the MonsterCon, I bought a MOTUC Spikor for $40, reminding me of the huge aftermarket prices of these figures.  I TRIED to buy a FlipShot and a Marzo from someone, who backed out of the deal not wanting to take my debit card.  (Pleeeze.  This is the 1990’s.  Duh!) (2) ToyGuru and Company are trying to get me to subscribe.  AND I wish I could.  But I can’t commit.  Oh how I want a Modulok.  But I can’t commit.  I just can’t do it.  That is paying more than $500 for mostly sight unseen product.  And I buy a ton of Magic Cards and Comic books.  And these things are mostly for MY entertainment.  I have mentioned before that my boys don’t really play with them.  (Well they are now, now that I scored a few figs, but the newness will soon wear off.)

I wished I could find some female characters.  No luck 😦  Some folks on the internet say that they found Moss Man, King Grayskull, and Grizzlor.  I had no luck here either.

Lots of reviews on the way, including my first ever UNBOXING Reviews!

“Forever is a long time, Skeletor!”

Groovy  I got an extra Aquaman comic in the Mail!  Looks like I might have a give-away soon!

Dork  What’s up with the news about a “red clear colored” Hordak figure?  So we can’t have filmation colors, but we can have this weird variant, which is being offered as a rare “legendary” type figure?

Groovy  SoundGarden!  Man, I can’t get enough of them it seems lately.

Dork  Too bad I can’t go to the Carolina Rebellion this weekend and see them.

Groovy  I picked up some recent comics for a quarter a piece at the Edge of the World Public Library!

Dork  I haven’t mentioned Free Comic Book Day yet.  Because I didn’t get anything good.  They were wiped out at both the Tangled Web and Mad Max’s Comics on Saturday by the time I got there.

Groovy  Rumor has it that the MOTUC subscription may be a bit cheaper this time.  I hope so.  Maybe I can subscribe and get in on some of the best stuff in MOTU.  Still to come are “Two Bad” and associated characters “Tuvarr” and “Badra,” “Modulok/Multibot/Megabeast,” 200x Evil Lynn, “Tongue Lasher,” “Blade,” “Saurod,” and more, which I really want.

Dork  I don’t care much for POP.  Not that I don’t like it.  But that is not what I am interested in collecting.  But it appears that next year is going to have a ton of POP characters.  I personally think they should offer POP as a separate subscription.  Kind of like the Filmation Sub and the 30th anniversary sub.  And keep it MOTU vintage in the main line.  We already got our She-Ra and Cat-ra. And Bo.  Leave those other guys for the POP fans to buy.  Don’t force them on those who don’t want them.  Which is part of the reason I’ve been a cherry picker thus far.

Groovy  Baja Limon chips are SOOO GOOOD.  I picked mine up where all the cheapskates shop.  Big Lots!

Dork  The schools are encouraging Meatless Monday now.  These kids are pasty enough as it is.  Most of them are already iron deficient.  And your going to take away their meat now?  Unwise, people.  Unwise.  AND it would be different if they offered a healthy meatless choice.  Instead….Nacho Cheese?  I thought we were trying to COMBAT CHILDHOOD OBESITY!

“How can you have puddin’ if ya don’t eat yer meat!”