My review of the TruForce Collectibles Designer Series Megaman X can’t be a true unboxing.  This item was on display at the Tangled Web Comics and Games store in Spartanburg SC.  But I have the packaging, and here it is…very brilliant!  We picked it up for the price of $79.

Neither I nor the SpartanKid had ever heard of this brand name.  When we saw it, I of course thought it was a new line of D-Arts figure.  But this figure is superior to the D-Arts figures in several ways.  Keep on reading for more details! 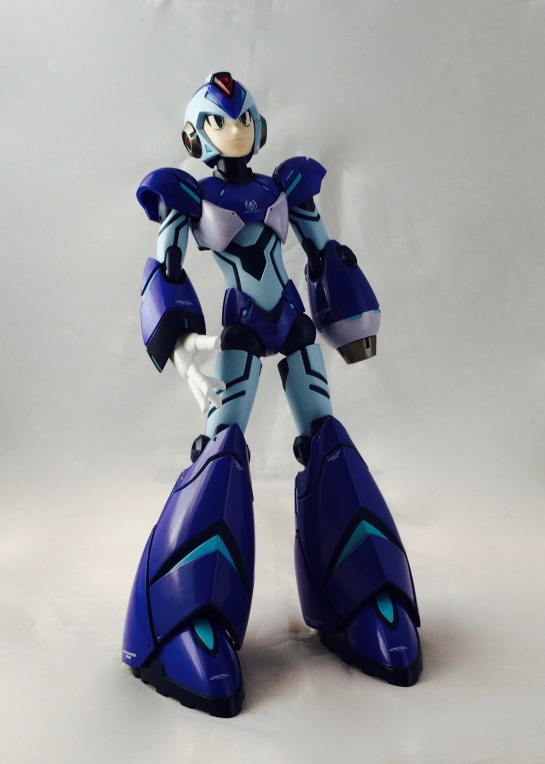 You can see why we thought it was D-Arts when you see the figure.  Here is a front and back view…the size and scale is very similar, and there is a similar design to the figure.  The D-Arts set a very high bar…those figures look exactly like their media counterparts.  AND those toys came with lots of accessories. AND they were generally durable.  (Generally.  Sometimes parts come off, but they snap back on with a little work.  We only have one figure that is broken, and that was after over a year of really rough play.)

A big difference is the way the figure highlights the “panel lines.”  They are bold black or in some other way pronounced.

Notice the words…”Beware of blast.”  The SpartanKid LOVES this detail.  It’s not for me, but it does the trick for him.  Megaman X has these words tattooed all over his body in places.  I think they are trying to make a “living diagram” or something. 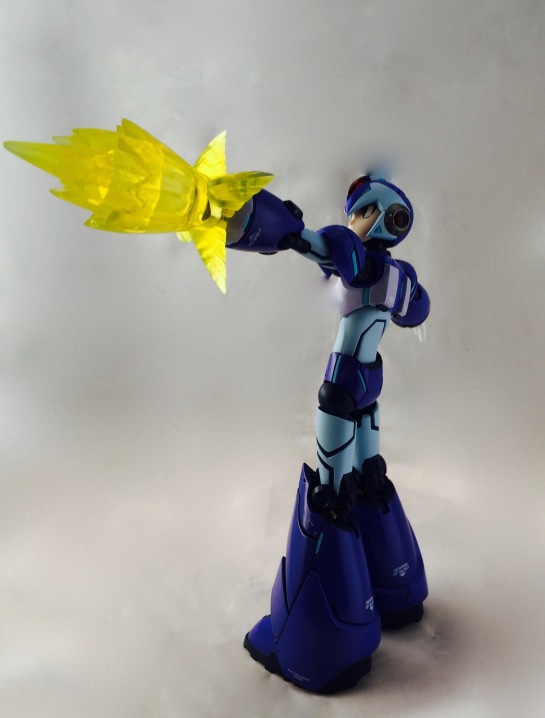 Megaman X came with two different blast effects.  One regular, and one charged.  In the picture below, you can see where we changed his face.  The figure came with two faces, one regular and one yelling.

Megaman X doesn’t have to have his blaster out all the time…he came with alternate fist hands as well.

Here is TruForce Megaman X facing a potential blast from D-Arts Zero Type 2.  You can see a little comparison here…The SpartanKid tells me that in the fiction and video games that Zero actually should be taller than X.  (I reviewed the Black Zero version of this figure here.  They are the same except for the color scheme.)

Designer Series X came with something else…something very welcome!  An articulated flight stand!  I haven’t mentioned it yet, but this figure is fairly substantial.  It really feels like you are holding something weighty.  This is because there are lots of DIE CAST parts.  Not just regular plastic.  Which is why this flight stand is all the more useful.

You can pose two figures in battle.

When you bend Megaman’s knees, you get this awesome detail.  You can see the machine parts inside.  And this requires nothing more than bending the knee.

D-arts Vile Type 2 had an issue where he had a “knee blast” that required disassembling the leg.  Thankfully, this figure forgoes any of that nonsense. 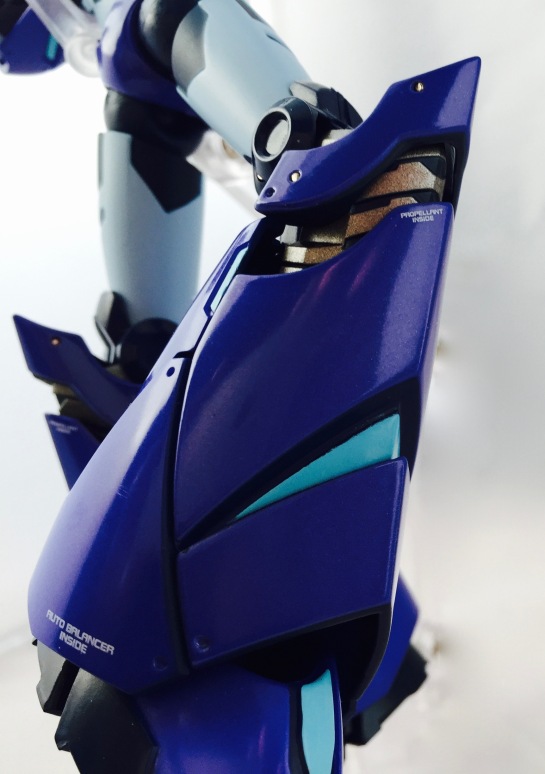 Remember “Beware of Blast” tattooed on the back of his calves?  Those are actually panel doors that open to reveal rocket boosters!

And if all of this wasn’t enough, the true icing on the cake is the working LED light in the blaster!

I had to finagle around with the mechanism to make it work correctly…but after I got it going, it worked like a charm!

SO the SpartanNerd rates the TruForce Collectibles Designer Series MegaMan X a solid 5/5.  What an incredible figure.  And true to the spirit of the character.  There are also lots of features to keep an adult or a kid busy.  This figure would look great in an office or a man-cave.  I couldn’t recommend it more!

Do you agree or disagree?  Let me know in the comments! 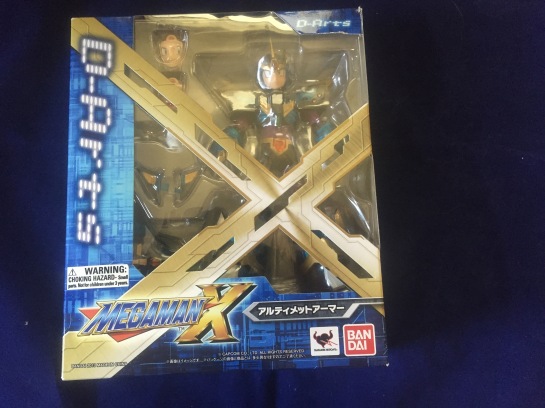 SpartanKid purchased D-Arts Ultimate Armor X with some money that he saved up.  It was $47.29 on Ebay.  The other figures in this line have been excellent.  Does Ultimate Armor X measure up?  Keep reading to find out!

Megaman X came in this window box.  There is Japanese writing all over it, except for the branding and the name of the character.  I suspect the words in the black under the window explain that this is the Ultimate Armor version.

The back of the box shows some suggested poses for Megaman X.  Everything is in Japanese…so…

The sides of the box deliver just as good of an experience as the other toys in this line.

Opening the box you see this double blister tray. 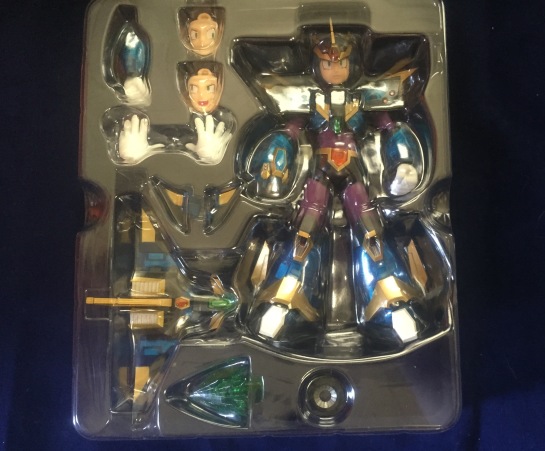 You can see all of Megaman’s parts and accessories in this tray. 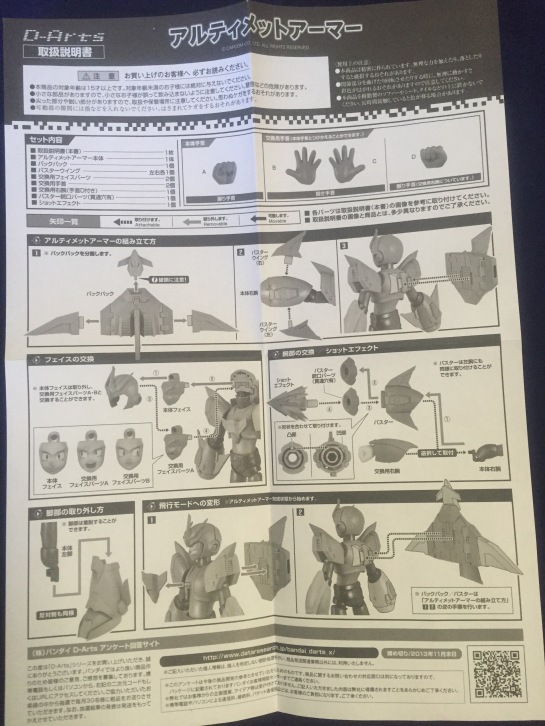 You also get this nifty sheet of instructions.  Good thing there are good pictures!  I need to scan that QR code and see where it takes me.  (I did.  The site is in Japanese, with no translation button evident.  It appears to have a shopping cart, however.) 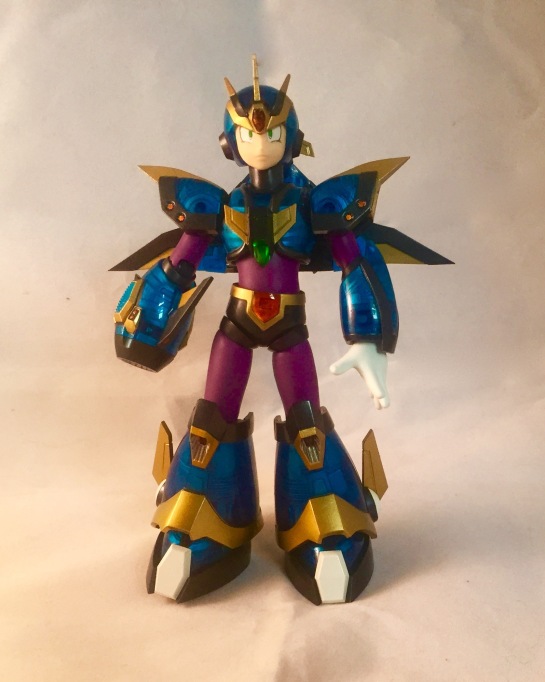 Megaman X looks like this standing up.  His big feet insure that he doesn’t fall over.  Noteworthy, those feet have two rocket boosters on the soles, as opposed to one on the other figures.  I suppose this means he flies faster…

(SpartanKid tells me that the others can’t fly at all!  Zero can double jump depending on your upgrade.)

He has some gems that are very evident…this alongside the blue and gold color scheme as well as the purple armor color makes this character very colorful when compared to Black Zero and regular Megaman X. 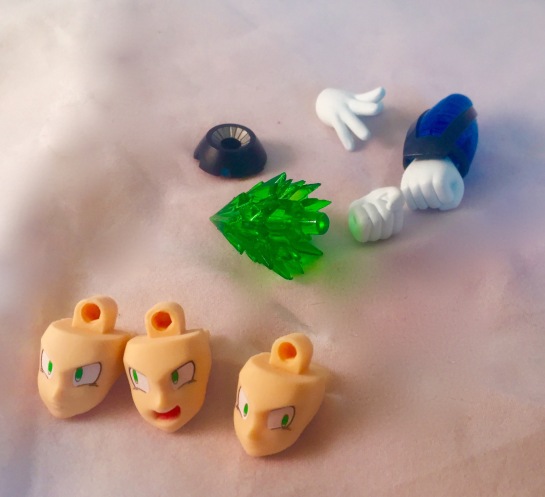 These were the accessories that came with Megaman X (that weren’t currently on the figure…with exception to the face for comparison purposes.)  One face is shifty eyed.  One is screaming from battle.  The other is normal.

The green blast is from a halfway charged shot.  (According to the SpartanKid.) 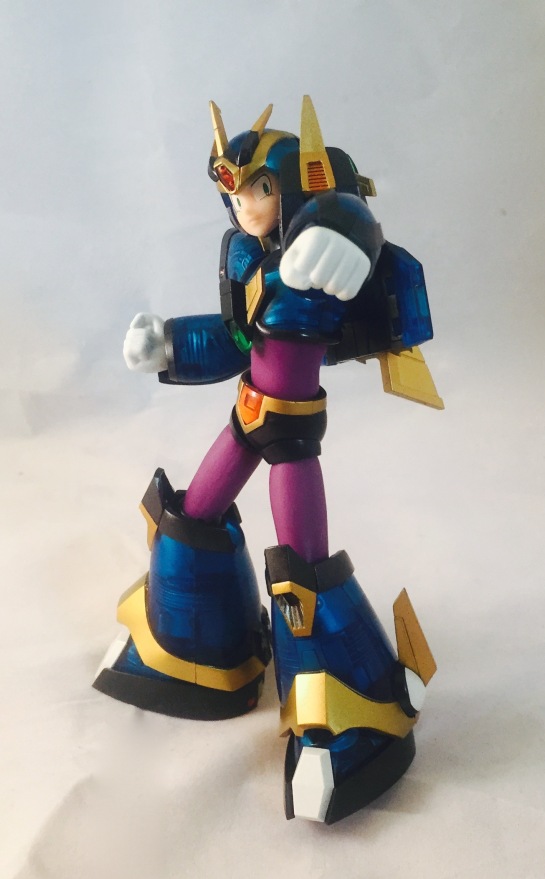 At first I thought the shifty eyed face would be kind of dumb, until I saw this pose.  It looks spectacular!

The screaming face lets you do a Mortal Kombat inspired uppercut. 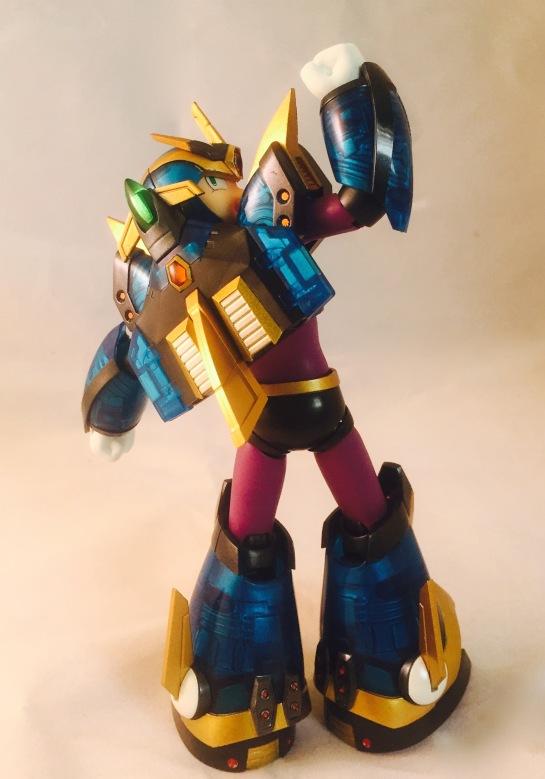 The SpartanKid said that Ultimate Armor Megaman X doesn’t always have the wings out on the backpack.  The wings are removable for those special times.  I really like the circuitry details on the backpack.  (This detail is all over the figure…his plastic is semi-transluscent, giving a very cool effect.

Black Zero is still in good shape.  Regular Megaman X has taken some…abuse…his arm had to be super-glued into place after over a year of rambunctious SpartanKid play.  Really a testament to the surprising durability of these figures.  As an adult, I would expect as much from figures that cost so much.

We didn’t take any pictures, but the accessories are all interchangeable, as are the faces.

Here is a battle pose between Megaman X, Black Zero, and Axl.  Note that Axl isn’t a D-Arts figure…

SpartanKid has some things to say….

“Ultimate Armor X has a lot of details not evident in the games.”

“In Megaman X 5, Ultimate Armor X is a cheat code, and an unlockable thing…(the same for Black zero as well.)”

“One of my only complaints is that he DID NOT come with a Z-Saber…Like he had in Megaman X 6.”

SpartanNerd Rating of D-Arts Megaman X Ultimate Armor version is 5/5.  While Black Zero had an issue with the pegs for the hands right out of the box, no such issue has been apparent on this figure.  This figure is over the top as far as details, accessories, articulation, and posibility.

SpartanNerd Rating of D-Arts Megaman X Ultimate Armor version is 5/5. Do you agree or disagree?  Let me know in the comments!