He-Man.org indicated that these were coming to Wal-Mart, and on that very same day I went to investigate, only to find that they only had Transformers and Power Rangers Blind Boxes by the Loyal Subjects.  I don’t live near Wal-Mart, nor do I like going there.  So it was another two weeks before I went back to look again.  And there it was.  I got the second figure from the case!  Why not more?  This little box has a steep price of $12.95!

The box is very nice.  It has a shiny treatment, that isn’t foil.  Instead, it is just…slick and shiny.  It makes the images of the figures and characters really pop!  There is a Filmation Castle Grayskull motif to the box as well.  And MASTERS OF THE UNIVERSE is plastered all over the box.  It is nice to see the brand on store shelves again!

I have bought so many Magic the Gathering Booster packs, that I am done.  I am only buying the singles I want, unless the packs come with some other product.  (Think Planeswalker Packs, or Fat Packs.)  Other than that, the only way I am opeing a pack is if I draft it or win it.  That’s because you get burned so often.  And there is no telling what’s inside.  Blind Boxes/bags have the same problem.

I’ve only opened one Blind Bag/Box for myself in my adult life, and I did it for the school children.  It was a Nina Turtles Mega Block Mini Figure.  I gave them all a speech about how the picture shows lots of different characters, and kind of gets your hopes up.  But then when you open it, it won’t be what you wanted, probably.  I told them that my favorite was Donatello, but I was OK if it was someone else.  We also discussed the rare and chase figures that it could be, and how those are ways that the company gets you to buy more.  My turtle turned out to be Michaelangelo.  And now he sits on top of my white board.

So this is the second Blind Box/Bag I am opening.  Do I hope it’s He-Man or Skeletor? Certainly!  Do I hope it is a special rare flocked red Beastman.  Heck Yeah!  But realisitcally, I expect it to be something else.

The box is so nice, I decided to open it carefully. I intend to display the figure atop the box!

Inside the box was a foil bag.  This is the second layer of security to keep prying eyes out!  The house doesn’t win if you know what figure you are getting.

Here is what was inside!  Tri-Clops!

I don’t own Masters of the Universe Classics Tri-Clops…(who does?)  But I do own my vintage one still.  But I won’t be showing you that.  He is in WAY AWFUL shape.  his visor is busted off, so only the top layer remains, making him look eyeless but with some kind of deranged hat.

A little talk about Tri-Clops.  As a kid, I played with Tri-Clops all the time.  He was SO FUN. The eyes spinning thing was AWESOME!  But his sword was the other big thing.  Everyone knew this was the coolest sword in MOTU.  He-Man’s sword was shorter and lacking in detail compared to Tri-Clops.  And when I couldn’t find He-Man’s, and didn’t want to use Prince Adam’s LAME pink sword, I would use Tri-Clops sword in its place.

This fully posable vinyl figure comes with a miniature copy of that same sword!

I am trying a new tactic in photographing Tri-Clops.  I am using the “Crafs Man”s method of having a trash can as a diffuser.  Great results!  You can see Tri-Clops very good here.This is just about as vanilla a pose as I can get you.

You can see the holster on the back of the removable armor.  This removes just like you would expect, but you have to pop off his head.

Tri-Clops spinning eyes works really well.  Not as loose as the vintage, but still pretty cool.  You can see he IS fully articulated.  As a two-and-a-half inch figure, it is pretty incredible how much articulation they got into him!  Ankles that swivel, hip-thigh joints, torso swivel, jointed arms, swivel wrist with hands that can hold weapons, and head on a ball joint.

Most vinyl figures around my house are of the “Funko” philosophy.  Not much articulation.  Tri-Clops takes pointers from a different line of figures, I think.

These Sonic guys, who I really like to photograph, have all of the same articulation points as Tri-Clops.  And are the same size, but not muscular, of course.

I DO have the Tri-Clops sword that came in the MOTUC weapons pack.  The sword that isn’t painted green, but is painted like a traditional sword.  I thought it would be cool to see Tri-Clops hold it.

He is larger than Mega-Bloks or Lego mini-figures.

But smaller than MOTUC figures.

So what does the SpartanNerd rate the Loyal Subjects Blind Box Masters of the Universe Mini Vinyl Tri-Clops?

I think there is some “Masters of the Universe” fan tax added to the price.  I think this item is worth $12.95 on a blister card.  But not as a blind bag.  If I bought three more of these, I could have three more Tri-Clops.  That’s a bummer.  I don’t even want one more copy.  The one I opened here is enough.  And this is enough deterrent for people who collect stuff.

The product though is terrific.  These vinyl figures do real justice to their source material.  I have to complain about just a little bit of paint slop on the back of his furry shorts.  But otherwise, he has excellent features, and you feel like you are playing with a miniature Tri-Clops.  (you are, actually.

So I am going to rate the Loyal Subjects Masters of the Universe Blind Box Mini at 3/5.  This would have been a 4/5 if it was carded, and 5/5 if there wasn’t any paint slop.

So do you agree or disagree?  Let me know in the comments!

Today I am going to rant about something.  Everyone who reads this blog knows that I am a cheapskate.  This post might sound like “get off my lawn.”  But I feel strongly about this, and have put alot of thought into it.  I have to teach my children about the value of money, and so when they read this, maybe they’ll get it too.

I am specifically ranting about the amount of money that Lego MiniFigs are going for nowadays.  My question is, Why?

(I should say that these pictures come from places that I will not disclose, on the web and in person)

Here is a MODEST example.

WHY PEOPLE?  THIS IS INSANITY!  These guys are zany and off the wall.  Who is the scientist?  Why would you pay $29.99 for a generic scientist?  Why would you buy any of these guys.  These are the kind you should get in a starter kit and give to an 8 year old.  The kit should cost about $10, and contain about 100 primary colored bricks of assorted sizes and shapes.
Here’s another, more specific and crazy one.

OF COURSE I am a Star Wars fan.  I unashamedly identify with Anakin/ Vader.  I also think the LEGO Star Wars video games are fun, and enjoy the cuteness of them as well.  But I think this much money for a mini-fig is ridiculous.

Remember, we are talking about something about the size of a quarter, made out of plastic. 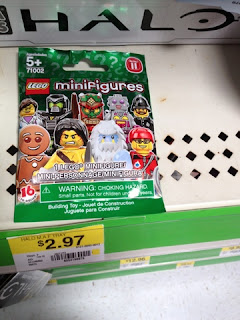 The Mystery Pack here seems reasonable enough.  This kind of thing is popular nowadays.  But you don’t know what you are getting…And I happen to know, that these guys tend to be rather generic.  (I know this is a pic of the HALO MEGA BLOCKS mystery pack price..But both are the same price, I checked.  At least with Halo, you know you are getting something Halo.)  $2.97…You can get a happy meal for this price, and get food AND a better toy.

Now, I don’t think the Mystery Pack is entirely overpriced…It’s just not my kind of thing.  Magic The Gathering Booster Packs operate the same way…More about them later in the post.

Am I alone in this?

Here are some things to compare for discussion of value.

I guess I just don’t value Lego MiniFigs.  They are the kind of thing that just gets played with for awhile, then taken apart, and then the hands get lost, or the weapons, or they get mixed up.  And the kids could have just as much fun with the generic type you get in the Mystery Pack.  Or the ones you find at a yard sale….

I mean, for as much money as the Darth Vader up there, you could have THREE Ninja Turtles.  And you wouldn’t have to order them on the internet…You can walk out the store with them!

Here’s a “girly” example.  For $19.97, you can own a doll, with tons of accessories…A popular toy at that!  You still aren’t paying as much as you are for Vader! 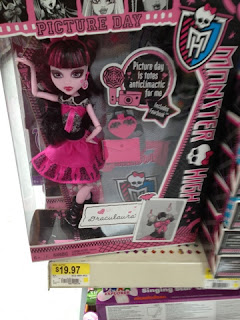 The Great SpartanAunt is guilty.  You see, she got the SpartanSmurfs some extravagantly priced Storm Troopers and Clone Mini-Figs.  And spoiled them!  I try and tell them…Look, you could get THIS item, or four of THESE items for that price…Nope.

There is nothing there but INSANITY!  Am I being a jerk?

I exercise caution when I am buying Magic Cards with the boys.  I don’t feel a piece of cardboard is worth the price of a meal for a whole family at a decent restaurant.  I personally own a Voice of Reason…This card would cost $35-$50…But I got it in a booster pack….That’s How I roll, see.  And all of the Shocklands that I own, I got the same way, or traded.  I boosted my collection, and I keep it organized alphabetically by set.  I am getting the bang for my buck, see.  And I play everyday.

The SpartanSmurfs are going on and on about Mr. Gold.  He’ll cost his weight in real gold.  Mr. Gold is apparently the rarest MiniFig or something like that.  Here’s what I see happening.  They’ll get a Mr. Gold.  Then he’ll be in 10 golden pieces, mixed into Storm Trooper and Ninjago parts.

And I just don’t see the value here.

And that is my two-cents cheapskate opinion!  Are you mad now?…Comment!