“No.  No. Not HIM!”  Batman utters this line pretty often.  Is it poor writing?

He says this as Superman grins a Joker-ish grin at him.

Yes indeed.  The Joker returned before Robin has been claimed.  BIG SURPRISE!

Back in Summer 2013, as the “Zero Year” storyline was hitting the shelves, and the “Death of the Family” story fresh in our minds, not to mention Damian’s sudden death, there was an innocuous “Batman Annual #2” issue promising a blurb from Zero Year.  To me, I read this issue and enjoyed it, but thought the Zero Year part of the story was just added as hype to sell the book and maximize money from that particular story event.

But here we are.  November 2014.  A year and a half later or round about.  And all this time, sitting in my comic book storage box and yours too, was a secondary character named Eric Border.  A nice guy.  Someone who cared for the patients…a truly caring doctor.

And he was the Joker.  Biding his time!  (I dug through my comics to re-read “Annual #2”.  Oh the planning that went into this!  There were hints in that issue we would have never seen!) 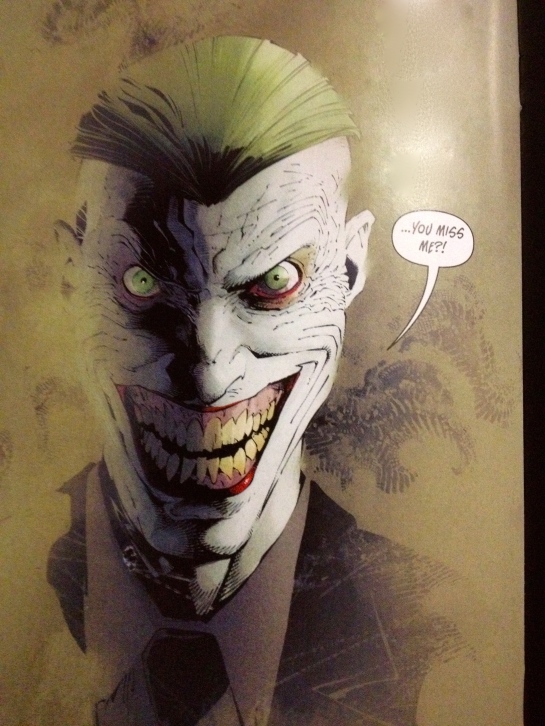 This twist had me reeling!  When I read this in Batman #36,  I was shocked!  Not real clear entirely how he got his new “mug.”  But he has one, and is looking younger and more current.  (He also has his old face, so what has “Joker’s Daughter” been wearing?)

This storyline, “Endgame,” has been a little disjunct so far.  For instance, suddenly without warning, the Justice League starts attacking Batman.  He is prepared to neutralize them all, but when he spits the “kryptonite gum” in Superman’s face, we don’t really see it making Superman suddenly crash.  A tiny dose of the stuff was enough to beat him?  And because Batman Eternal hasn’t been completed yet, we are having to infer where and why Batman has set up shop by reading the tiny details between the lines.  And we keep seeing a couple of sidekicks, one “Lark” and the other “Bluebird.”  These haven’t been explained sufficiently.  At least “Lark” hasn’t.  (Isn’t Lark the Penguin’s lackey?)

(I’m starting to think Stephanie Brown may be the next Robin.  I’m thinking the “Damian Resurrection” story might be a bait and switch.)

So, I’m not the least bit worried about Batman being stuck in that cell paralyzed by the Joker and being poisoned by gas.  This is the classic Batman scenario.  Classic like in “1960’s” TV show!  Batman will get out of it somehow in issue #37.  Can’t wait!

One more thing…there is a backup story going on, which evidently will give us new information about the Joker and his origin.  A bunch of minor sickos have kidnapped Maureen, (who was dropped off by Eric Border,) and are telling her the stories the Joker told them to tell her.  All different crazy takes on who the Joker is and where he is from.  The first one in Batman #35 about the Joker being a demon rising out of the swamp on a mystical crossroads was pretty freaky.  Actually really disturbing.  And then #36’s story about him being an alien robot, also weird.  We the readers know for certain that these stories can’t be true.

Time to go back and read Zero Year again, and get a look at that chemistry teacher who was loading tanks for the Red Hood gang.  (was this in issue #24?)