I have been playing “junk,” that means Green White and Black. Kahns of Tarkir calls this “Abzan.” Whatever. The cards revealed so far are pretty amazing! I can’t wait!”

I wrote these words and saved them as a draft in WordPress over two weeks ago.

Sadly, my sealed deck experience fell flat.  And I’m not sure why.

I went to the midnight pre-release, basically on a tiny little nap.  I left early, about 10:30 PM, and wished I had brought a commander deck or something.   I didn’t intend to purchase anything outside of basic snack needs.  But the Tangled Web was slam dunk packed, and excitement was in the air.  When it was finally time to break out the packs, I was happy to see a beautifully designed box, and got a nice pin to wear also depicting the symbol of the “Abzan Houses”.

The seeded deck came with a beautiful foil “Hardened Scales,” a good card.  And I got a good bit of cards in my other packs that went well with “Abzan Houses” green-black-white colors.  Only one rare didn’t fit at all.  I was also happy to get a copy of “Windswept Heath.”  (If you know the SpartanNerd’s secret identity, then you know why!)

My problem was, I believe, that I didn’t have many chumps.  A large quantity of my card pool was four drops and higher!  I got a copy of “Anafenza, The Foremost” but she amounted to one of the cheapest spells in my deck!  I did have a few morphs, but I’m not sure I played the best ones.  (Abzan Guide costs way to much to morph.)  I got some removal, but most of it was over-costed.  I didn’t get many black cards to refill my mono-black deck.  (I am of the opinion that the wizards are trying to suppress mono-black devotion.)

I played until 3:30 AM, then decided to drop.  My first match as a loss to a blue-red deck, and my second match was a draw to five color deck that was mainly a mirror but splashing red and blue.  I reckoned that it wasn’t worth staying the other four rounds after what amounted to two losses and me getting sleepier and sleepier.  (With house framing to do the next day!)

The weird thing about this particular format for sealed deck was how doggone SLOW it was.  You pretty much have to play three colors, and mana-fixing is the number one priority.  This means 18 cards of the 40 are boring lands.  I was able to fix with “life gain” lands, however, three copies of “Jungle Hollow” and one “Soured Barrens.”  As well as the “Abzan Banner” and Sandsteppe Citadel.”  But all of these lands enter tapped, so that will slow you down.  Then there is the opposite.  “Windswept Heath” is very speedy!  But combine this slow mana base with cards that ask for ridiculous mana requirements, and you get a slow, slow, slow format.

Hub City Geeks, I’m afraid this was my final midnight pre-release.  You are going to have to wait until Saturday afternoon when the next set comes out.  I just don’t play that well during the day, much less in the wee hours of the morning!

I am going to post a copy of all of the rares I got as they are in my trade binder, then say a word or two about them. 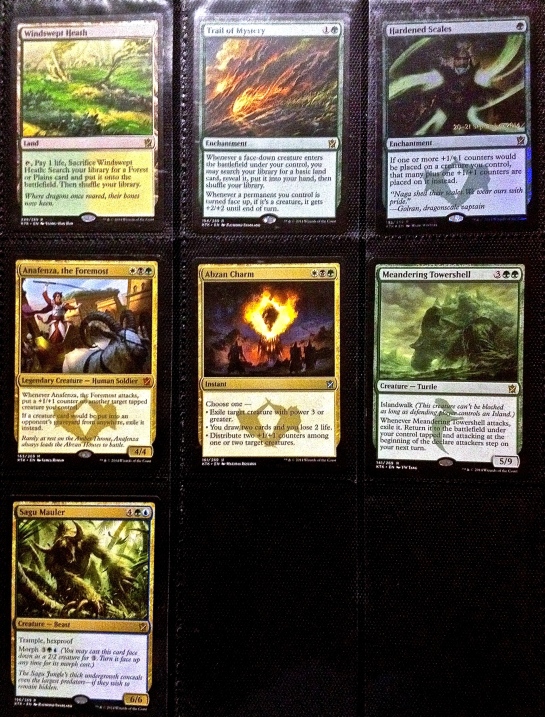 “Windswept Heath”  Especially glad to have this fetch land!  I want MORE!

“Trail of Mystery” was a good idea.  It never showed up in all six matches of MTG I got to play.

“Hardened Scales” I opted not to play this guy but instead to play Trail of Mystery.  All I know about sealed deck is “keep it about the creatures”  And enchantments don’t do anything if they don’t have creatures to effect.  The art of this card is very pretty…this is the promo foil version.  I like the idea of what this card does, however, and it is going to find a home somewhere somehow in my constructed decks.

“Anafenza, the Foremost.”  I believe Anafenza is meant to hate on “delve.”  (With that mechanic, you exile cards from the graveyard as a cost for colorless mana.)  The other ability goes well with “outlast.”  (Outlast lest you pay a cost and tap a creature to put a counter on it. She lets you put an extra counter.  She also gives them a counter when they attack)  Because she is a potentially early bomb, she also got removed a good bit.

“Abzan Charm.”  OK, not a rare.  This card is being touted as a potential top card in Standard and Modern.  So here it sits in my binder!  It is good removal.  It is also a “sign in blood” for you.  And lastly it can target two creatures giving them a 1/1 counter.  If you are paying attention, then you know this will go great with “heroic” stuff from the “Theros” block!

“Meandering Towershell”  This is one of those cards…it makes you scratch your head.  Like “Alms Beast” did in “Gatecrash.”  WHY?  Why should it be exiled when it attacks?  Then come back during the attack phase next turn?  I don’t see the point.  You could LOSE THE GAME BY THEN.  In case you are wondering.  NO I DIDN”T PLAY IT!

“Sagu Mauler.”  Not in my colors.  But a pretty good card.  I may eventually try out the “sultai” graveyard strategy.  It might be an enhancement to “junk” to add another color.

I’m not giving up on “Kahns.”  This time I was just unlucky, and maybe should’ve played on Saturday afternoon instead of midnight.  I have already made a new “White weenie” deck with my new cards.  We’ll see how that works out next time I get to play standard.

Thanks for reading, faithful readers!