So here I am at the final deck from Commander 2015.  I have unboxed and reviewed all of them at this point.  It is April 7, and I am finished reviewing my Christmas present!  (Did yours last that long?!)  Here are links to the other four reviews.

The “mosaic” image above shows you the unboxing.  It was exactly as the other four, as expected.  The deck box looks really cool, but is inadequate for the job of holding the deck fully sleeved.  The pieces of paper are the guide to playing Magic, which is for playing conventional Magic and not commander…so that isn’t right here.  Good for new players in intro decks.  Not good for EDH.  The other is this poster. 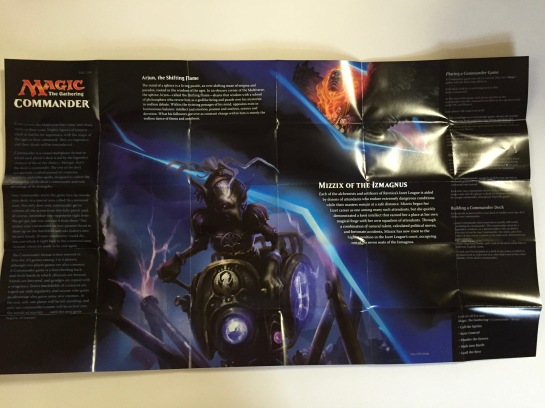 The front side shows off some story and bio information.  The back side has “playing the deck” and the decklist.

I don’t care for the art on this character.

Why did I wait on this one to be last?  Blue and Red are my least favorite color pair.  What “izzet” anyways?  (Get it!)

Before I move on, I want to say that I actually unboxed this weeks ago.  I took lots of pictures…and I have new backdrops, etc.  But I have another problem.  I am running out of space on my WordPress.  I will soon have to upgrade.  So I am going to go conservative with the pictures this time, and really just show you the gist of how this deck really works.

Mizzex gets a few cards to help her out along the way.  Goblin Electromancer is perfect for this deck.  Mizzen Mastery is a new card, letting you get back and play instants and sorceries from your graveyard.  See that overload cost.  Yeah.  That’s what we’re talking about!  Epic Experiment gets you some instants and sorceries for free.  Awaken the Sky Tyrant is deterrent.  Steam Augery always has been and always will be lots of fun.  Call the Skybreaker, with retrace, makes sure that no land is a dead draw.  And with CMV of seven, you are getting more and more experience counters when you do, making things smoother for you all around as long as you have Mizzix on the battlefield!  (This deck came with plenty of tokens. Not pictured)  Aethersnatch and Counterflux are two just all around great control spells.  Aethersnatch…just take over what they are doing!  Counter flux interrupts the stack.  KABAAAM!  And finally, Firemind’s Foresight would normally be unplayable, but it is an incredible combo in this deck, where much of the colorless mana in the cost is blanked by the experience counter ability or the spell is casted for free.  (as an effect of another spell.)

But these aren’t the only tricks the deck has. 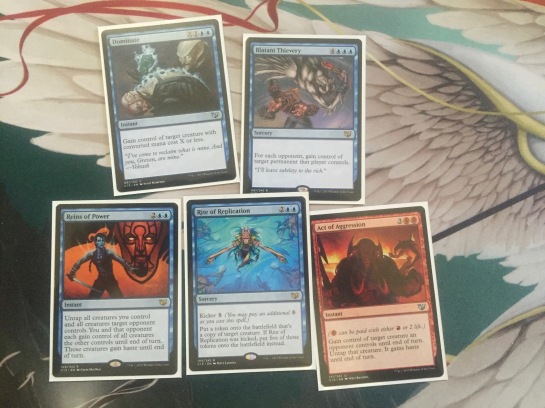 These five spells all do essentially the same thing.  They let you gain control of the opponent’s stuff.  This is where Serra Avatar isn’t good enough.  Just steal it from Oloro, Ageless Ascetic or Nahiri, the Lithomancer.  Or even steal THEM from their controller!  (Blatant Thievery says gain control of target permanent!)

Opponent putting up lots of tokens? 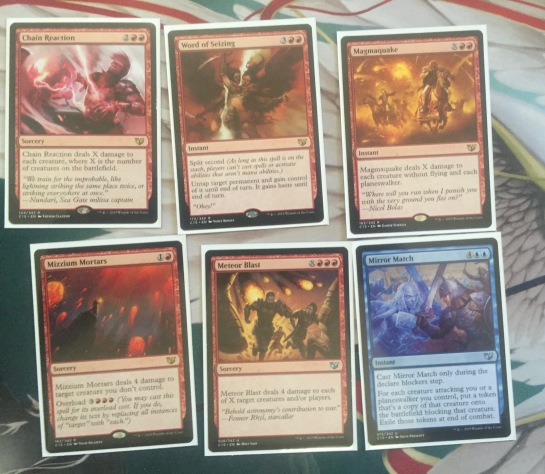 These six spells sweep the board, usually by burning everything.  Mirror Match is the exception.  So they have fifty 1/1 white Kors…when they attack, cast Mirror Match (probably for less than 6CMV) and bam.  All their work is undone by a single spell.

The other thing this deck does is create access to the cards you need one way or another.  There are “wheel of fortune” effects!

You are drawing and ditching cards.  Why would you want them in the graveyard?  There are ways to get them back.  And some of them have flashback anyways.  You have to be careful with these…sometimes you want what’s in your hand, so be sure you play wisely.  Arjun, the Shifting Flame is an alternate Commander for this deck.  I haven’t even tried him out, because Mizzix is so good.  The other alternate Commander is Melek, Izzet Paragon, a reprint from Return to Ravnica block.  He just gives you access to the top card of your library.

The rest of the deck is your general stuff.  Sol Ring.  Reliquary Tower.  The new Thought Vessel.  A Confluence card (A card with three options, and you can choose options more than once.)  A hideaway land.  Etc. 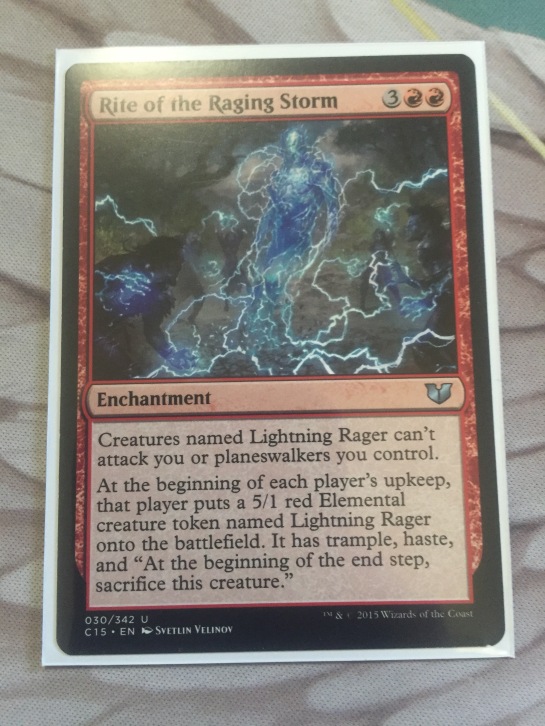 You don’t want to give your opponents something.  Ever.  They will abuse the privilege, I promise!  The promise of having a 5/1 token that can attack each turn sounds tempting.  But don’t fall for it.  Proshk will sacrifice it.  Someone will fling it at you.  When it dies, they will some how punish you.  Don’t do it!  In fact.  Take this card out and put in Storm Crow right now!

Now it’s time for a story.  And if you’ve been reading SpartanNerd for awhile, when I say that concerning Magic cards, it probably ain’t good.

I finally opened this product around St. Patrick’s Day this year.  (I was out of work sick.)  And I proceeded to play this as my Commander deck against the SpartanKid almost every day.

This deck lost over and over to Proshk, Sky-raider.  I would seem to have him backed in a corner…no way out of this one, and then it would suddenly turn around against me.

I began to get discouraged, so I encouraged him to play a different deck against this.  Finally he used Nahiri the Lithomancer, who never ever has beaten Mizzix.  Nahiri relies on getting creatures and equipping them.  This deck steals creatures.

My personal feeling is that this is a good deck, but it needs some work to make it better for control.  It has no Cancel.  No Mana Leak.  No lightning Bolt.  (How did they leave THOSE out?)  More basic control spells are needed. The creatures it has are generally large, with some upside like getting you card draw if they deal damage.  But this deck generally can only cast instant and sorceries cheaper.  The other thing is that the deck contains a bunch of “X” spells.  You can’t cast these without paying an “X” cost.  So Epic Experiment can fizzle.  In fact it seems it usually does.

It has been a long road to cover all of these decks.  I have enjoyed it.  I can compare this deck to Swell the Host in the amount of fun it has brought me.  Even though there was a ton of losing for awhile.  I play Magic because it is fun.  I am the ambitious sort of player, and this deck is filled with ambition and fulfillment of trying to be a control deck in the zany format of Commander.

I am going to rate it a 3/5.  I can’t forget all those losses.  But the fun I have had has made up for it.  The other mark was taken off because of the lack of staples for this color.

Do you agree or disagree, oh Hub City Geeks?  Let me know in the comments!