Bored and nearly broke…buying dish detergent and looking for cheap content…I came across this gem for a mere three dollars at Dollar General Market in Pacolet, SC.

This isn’t my first experience with Kreo Transformers.  One of the Spartan-children had a Kreo BumbleBee once.  They were really too young.  So I had to do the assembling.  Which was quite tough.  I specifically remember putting pieces on, only to have others let go.

Ranking building blocks…LEGO is king.  The blocks go tog enter comfortably.  There are certain “design standards” that LEGO adheres to.  Then there are the iconic Mini-Figures.

Mega-Blocks…second place…at one time these felt like generic LEGO blocks.  Nowadays a kid might just as well be talking about LEGOs and Mega-Blocks interchangeably.  Mega-Blocks has its own figures, and cool licenses such as Halo.  They don’t market to as young of a crowd of kids as LEGO.  But they don’t have the same design standards as LEGO.  So they might just wing a big rectangle on a single stud, and call that a moving part.  Not the best our soundest solution.

Then KREO has to be last.  These blocks are meant to be interchangeable with the other two.  But there are some problems. They tend to be smaller.  And the studs don’t stick together so well even with blocks in the same set.  And forget about design standards…a part might be held together with tension, or whatever.  I remember that BumbleBee having layers and layers of underside.  This was neither fun to build, and seemed to be lacking in function.

When I saw this KREO Transformer, I remembered the BumbleBee experience.  I also know that that particular set was among the first KREO sets.  I wondered if things had moved along any and improved?  Keep on reading for more of the review!

The back of the bag looked like this…featuring many transformers…most of whom I have little knowledge of or care for.  Rodimus Prime was among them, making me think these must be Transformers from season three of the Generation One cartoon.  (Longtime readers will know that I never cared much for Rodimus Prime.)

Opening the package revealed these two items…a poly-bag and the instructions. 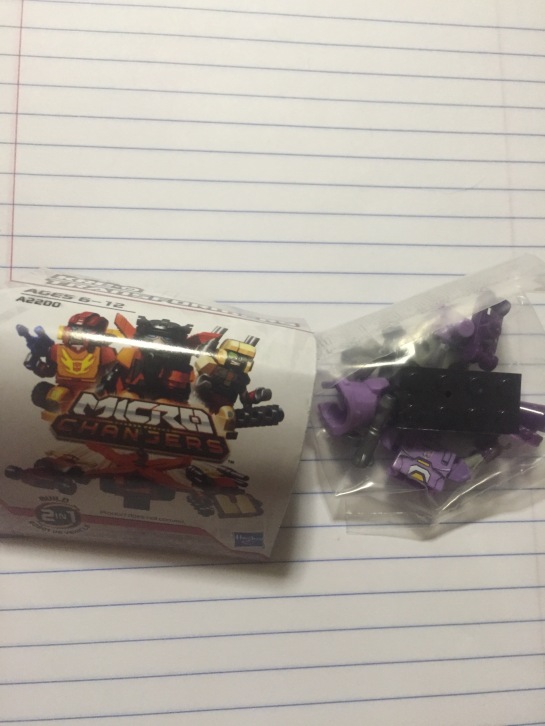 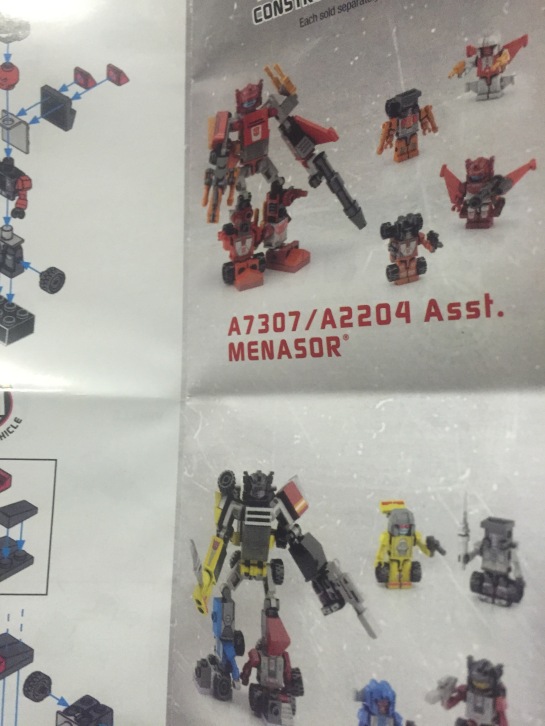 I believe the instructions have an error…The ad for Computron and Menasor are BACKWARDS.  Compton is the one at the top. I could be mistaken however, not being that much of an expert on Transformers.  But as a kid, I had Scattershot.  Furthermore, I saw a “Combiner Wars” version of Computron at Big Lots.

The Transformer I got was “Cyclonis.”  Here are the instructions…

Here are the assorted parts.

Here is my first build of Cyclonis.  As I look at him, I scour my memory to see if I can remember this character.  The wings on the arms really bother me.  So I re-arranged him to have a more “Starscream” build. 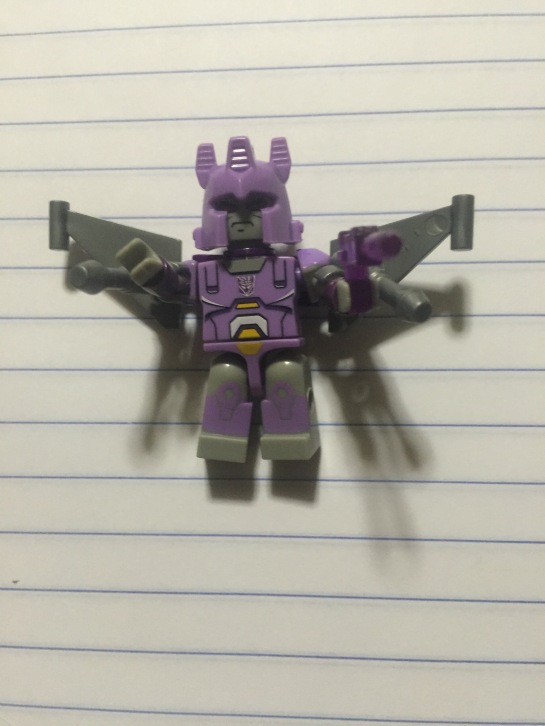 One thing that is immediately apparent is the helmet doesn’t want to stay on.  He has a head-barrel almost exactly like a LEGO mini figure.  But that helmet doesn’t snap on well.  And it keeps popping off.

After rebuilding him into “Thundercracker” or similar re-colored Starscream, I put him back the way he is supposed to be according to the instructions.  I am certain, however, if there was a Starscream KREO, he would probably have the same pieces with a different coloration.

Cyclonis…who was he?  The back of the bag tells me that he is probably from the episodes of Transformers I would only OCCASIONALLY watch.  I was very upset when they killed off Optimus Prime.  I also preferred the Autobot and Deception war to be on Earth, and finally the vehicle modes of the last season of Generation 1 Transformers tended to be science fiction things like ships, futuristic cannons, etc.  This made sense for a group of warriors on Cybertron.

Saying all this doesn’t change the fact that I owned more Transformers from this era than from the earlier era.  Transformers were expensive.  The ones I had were gifted to me.  And usually going to the store with money to purchase one meant that characters I knew would be out of stock…

Finally, It came to me.  A little blip in my memory where Galvatron is using Cyclonis name.  I broke down and looked at Wikipedia.  Indeed, Cyclonis was Galvatron’s “right hand man.”  And yes.  His wings are on his arms.

Transforming Cyclonis wan’t difficult.  He becomes one of those “futuristic” vehicles I mentioned.  The transformation really isn’t anything more than the figure on its belly, with an extra nosecone piece instead of the helmet.  And the wings re-arranged.

I much prefer the robot mode!

Cyclonis stands just fine without his KREO block-stand.  He comes with this purple gun, which is one of the coolest parts of this set.  That translucent purple reminds me of another Transformer I DID own, Shockwave…

I haven’t reviewed alot of LEGOs.  But as it goes, this is worth every bit of three dollars.  I really like the color scheme.  He is menacing, with guns on his back and a purple gun accessory.  You immediately know he is a Decepticon!  (I have always been more of a Deception, even though I regarded the Autobots as awesome as well.  But my toys were usually Decepticon.

Sure, it has some problems.  The helmet doesn’t like to stick to the single stud on top of his head.  He stands better without the stand…both feet don’t want to plug into it.  (That’s why you saw me posing him standing on one foot.)  There is ugly branding on the underside of one of the wings.

The SpartanNerd rates  KREO Transformers “Micro-changers” (Blind Bag) a 4/5.  For three dollars,you have something way cooler than most LEGO mini figures that come in blind bags.  For instance, I remember SpartanKid opening a Cheerleader, a clown, and a caveman.  At least this was a Decepticon!