LEGO SPEED CHAMPIONS!  These caught my eye at Toys ‘r’ Us in early spring as I walked through with the SpartanKid…bored out of my mind.  When I told the SpartanTeen about it, well…he was seriously psyched.

Finally, we had the chance to go together and pick one out.  I chose the Porsche 918 Spyder, and he chose a Ford Mustang GT.

Was all of the anticipation worth it?  Keep reading!  This will be a double review…

The box for the Porsche looks like this, showcasing the car, driver, and the little flag in the background.  We see the target age of 7-14, and 151 pieces included to build the kit.

The side of the box shows off the mini figure driver.  Not sure if he is supposed to represent a real person.  He’s cool in his green and black color scheme.

The Mustang GT has a similar box, showcasing LAP TIME instead of a flag.  I imagine if you collect all of the sets, the little pieces will add a lot of details to your racetrack!  This set is notably 185 pieces…odd, because it was three dollars less expensive than the Porsche.  ($17.99 and 14.99, respectively.)  I theorize it has something to do with the pack-in ratio.

We get some action poses on the back.  But no spec information like the other model.  And model is the operative word here…

The driver sports blue and white.

Both boxes have this easy access feature.  It is a perforated tab and flap to keep the box reusable.  So that’s nice.  If I was a kid, I would be interested in looking at this box over and over.  As a grown-up SpartanNerd, I am keeping the Lego boxes of all of the sets I open for organized storage.  I’m just crazy like that!

Both sets have the pieces polybagged.  No numbers on these bags, like in the Ninjago Dragon.  Just all-business polybag.

I won’t chronicle the build of the Mustang so much…The SpartanTeen put it together his own way.  I put mine together my way.  So I patiently organized my parts by color.  (He just free-for-alls with his pieces.)

After I built the car, I had these pieces left over!  Was it difficult to build?  Not at all.  Not the most interesting thing to build…I mean…it’s a car.  My only complaint is that the flag only had a sticker for one side…it clearly should have had two.

Here is the final build.

The wrench is a tool for the driver to hold, but it also serves another function as a separator tool for the hubcaps.  You can replace them with those seen above in the extra pieces.

Here are the leftovers from the SpartanTeen’s Mustang GT.  Not as many….He hit a snag in that one of his pieces was missing.  But he went to the spare lego parts and accommodated.

And here is his final build.  (His driver is inside the car.)

And the burning question I suppose everyone is asking, which car is faster?  We tested them by rolling them down a flat ramp.  The Mustang GT is fastest by a mile.  It is heavier, having more pieces.

So what do I rate these two Lego cars?  I mentioned that the build was kind of unremarkable.  It’s true.  But It IS just a car.

As a model, it looks like a lego version of the real thing.  BUT, there are a few things that could be improved.  The wheels stay straight.  There are no opening and closing doors.  No lights.  No spring action.  No working motor.  It functions as a push toy…like a big, plain hot wheels.

It is a great looking model.  It comes with exclusive mini-figures.  The extra accessory pieces could come together to make a great play set.  It was pretty affordable…the SpartanWife thought a little too expensive, but really, $15 is about par for the course when talking about basic toys nowadays.

I could see a grandparent buying ten of these for a grandchild at Christmas and keeping them busy for hours.

I have to rate it low because of what it lacks, but high because of how cool it is, and the playability.  Additionally, they are pretty durable, taking a pretty forceful hit against a paneling wall and only losing an exhaust pipe (In the case of the Mustang GT.)

So I am going to rate it 3.5 out of 5.  I don’t usually do decimals, but this is a little better than a 3/5.  I had fun doing something with my teenager, and tons of other adult fathers could have a similar experience with their child

I am catching a bug for building Lego sets…first Nexo Knights, then Chima, then a Ninjago Dragon, and now Speed Champions…What will I do next?  (I’m thinking about the girls oriented Elves!)

Faithful readers, go back and read my review of the Ultra-Pro Pro-Tower Deck Box, first, and then read this article to be more informed about what product I am talking about!

So, I actually DID get the SpartanWife to do some work on the box for me!  I chose art from some comics I had doubles of, “He-Man and the Masters of the Universe #8 and #9,” cut it out, and she decoupaged the art to the box.  See my results below! 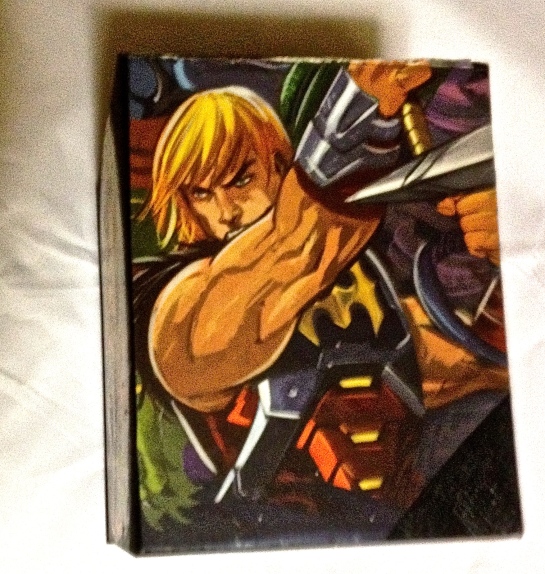 This is the back of the box.  I chose a splash page, so that I might have a large image of He-Man holding his sword.  When you open the box, you get to see the full image!

This large image is SOOO IMPRESSIVE!

I chose smaller art for the two sides. 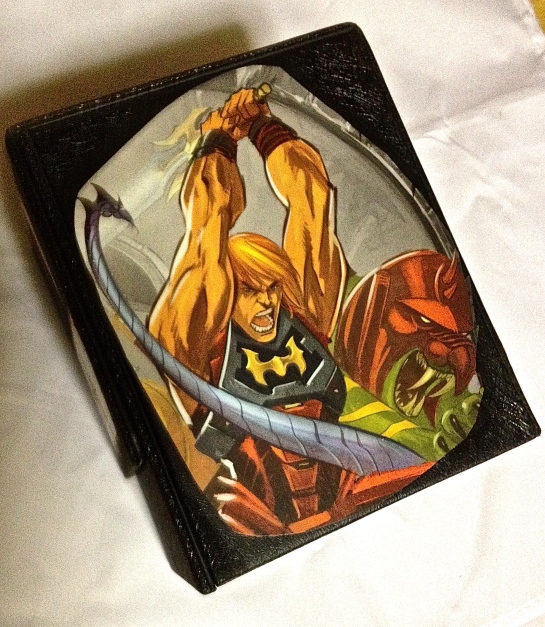 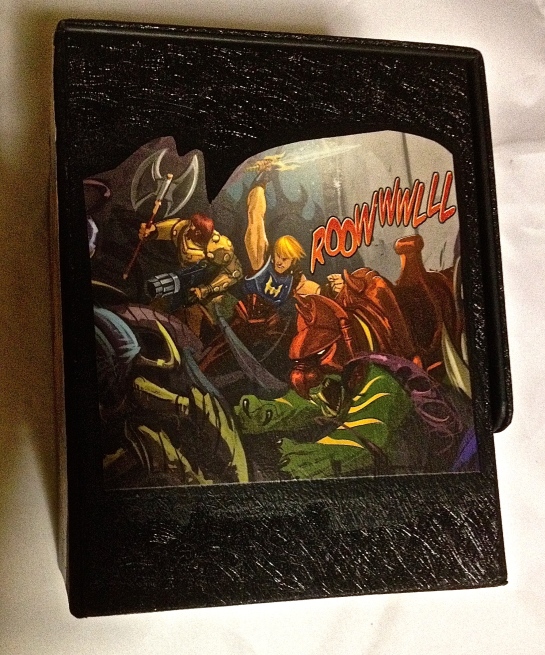 And instead of comic art, I chose the paper branding from a MOTUC figure that I hung onto for some occasion someday, such as this!  When the box is closed and you are looking at it, there is no mistake what brand of entertainment I am into! 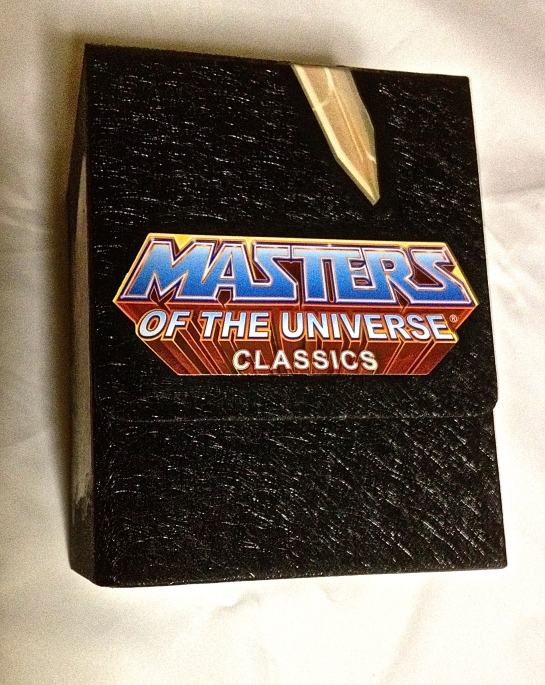 As far as ease of project…I cut out the art that I wanted, and then she trimmed it up.  The splash page cut the sword into two, but she was able to work it so that it appears seamless.  She decoupaged with “Mod-Podge,” and it feels really natural, like it was branded there at the factory!  The intricate texture of the box didn’t hamper the process at all, as some people seemed to be afraid of when I mentioned this project to them.

And as far as the results I got at the Magic tournament on Saturday, many people said WOW when they saw it!  A few people wanted to touch it, which was cool…It was dry and all.  And I had double the EDH matches, so it worked for getting attention as well!

The SpartanNerd give the SpartanWife a full 5/5 on this project!  Please leave comments and let me know what you think.  She would also like to hear from you, oh Hub City Geeks!