The SpartanNerd’s interest in Gundams is really very narrow.  I really only like what I have seen on Gundam Wing.  I realize that this is VERY narrow.  But Gundam Wing…the cartoon…as well it’s “Endless Waltz” movie, have tremendous sentimental value for me, as I was very interested in that at a transitional time of life.

I became aware of other Gundam properties by seeing models at Toys R Us for “Gundam Seed.”  Later, I would get “Gundam Battle Assault 2” for Playstation.  This game exposed me to several more gundams.  And soon after, I saw “SD” figures on the shelves at different stores.  SD stood for “Super Deformed,” and it was a big-headed fad about ten years ago.  I suppose that gave away to the “vinyl” toy craze today.

The SpartanKids are once again really interested in Gundams, and I have been encouraged to review them.  So without further ado, here is my review of “SD Build Burning Gundam.” 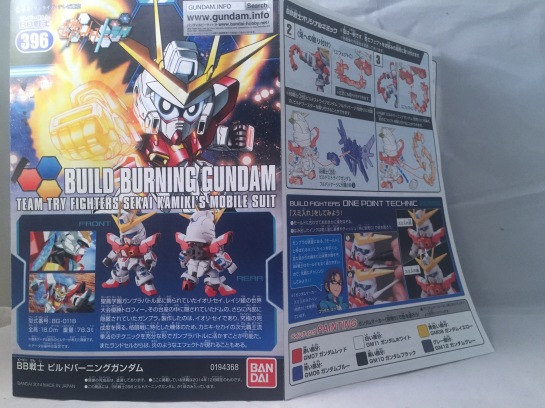 The instructions were entirely in Japanese.  It is a good thing that the diagrams are very good, otherwise my nine year old might not have been able to assemble it! 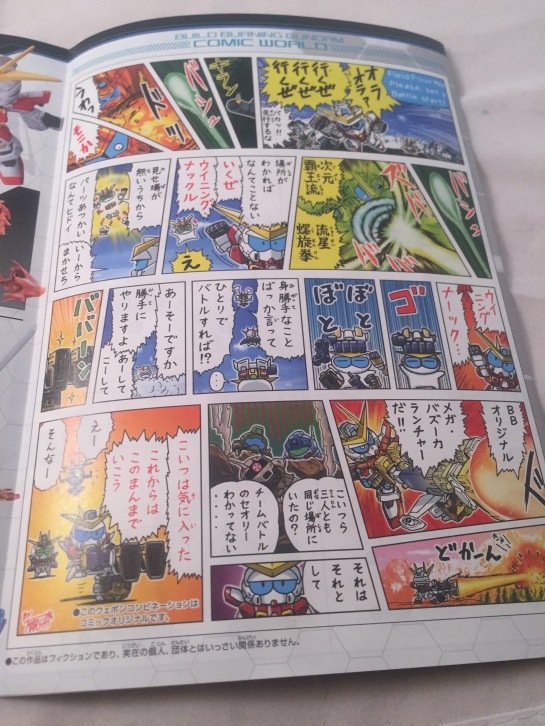 The back of the instructions contains a manga.  Again, not quite sure what is happening here. 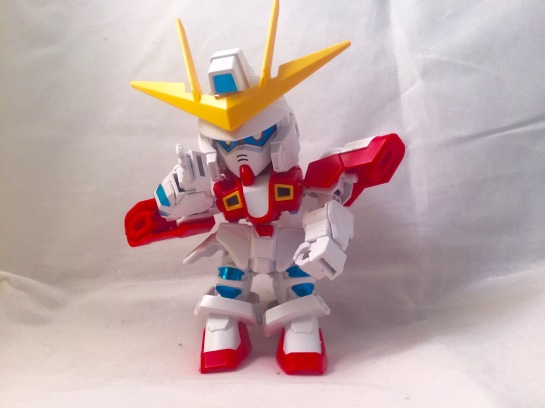 SpartanKid’s build of SD Build Burning Gundam stands just fine.  It is posable in all ways expected for a Gundam.  It doesn’t have a flight stand or other stand, however.

The model comes with these accessories.  I know from “Gundam Battle Assault 2” that Burning Gundam’s main weapon is fire coming from his hands or fingers.  (He frequently yells, “Burning Finger!”)

Here he is with both fingers ablaze.  I don’t really care for this accessory.  It reminds me of some kind of dishrag attached to his hand.

This “fiery chain” is better, as a weapon.  We also figured out that these pieces can attach to the “dishcloth” pieces.

Here is a comparison shot to another Gundam in the series.  The “Knight Gundam” has more going for it.

So what are my thoughts on this model?

It was fairly inexpensive.  But it has some problems that come with that “cheapness.”  One big thing is that the head doesn’t stay on.  Another, the accessories are kind of … whimsical.  It comes with no guns.  It doesn’t transform.  It just “is”.

I know nothing of the characters, and have no attachment.  I speak as an outsider.  To me, this Gundam is kind of a generic Wing Gundam.  Accept he doesn’t have wings.

But that price point has to figure in.  This model was only $8.00.  This kept the SpartanKid occupied for two days building it.  He has plans to “decorate” it even more.

SpartanKid has a few things to say about this item.

“The model is pretty colorful.  The attachments go on easily.”

“Despite how the head tends to fall off, you can just set it on top of the body.”

The SpartanNerd’s rating of “SD Build Burning Gundam” is 3/5.  On the lower end of three.  I am only judging the merits of the product, not the SpartanKid’s build of it.  DO you agree or disagree, oh Hub City Geeks?  Let me know in the comments!