Nobody panic!  The SpartanNerd purchased something he originally said he had no interest in!

But there is a story…

I am going to take a moment to talk about how wonderful the folks at the Tangled Web Comics and Games are in Spartanburg, SC.  I came to their store yesterday with two cards to trade, Inkmoth Nexus from the French Event Deck I recently purchased and reviewed.  I won’t divulge the details of our trade.  But these decent folks made sure I had a good deal.  This was the last copy of the event deck they had, and I needed five of the cards in the deck.  As well as I didn’t have the sword or the Elspeth.

The Tangled Web is just good, small business.  They are forever nice.  And reward their loyal customers.  Daniel, Anna, Danny, and Josh, this is a shout out to you.  Thanks for being so nice!  I have visited a ton of different similar shops and gaming places, but The Tangled Web stands a head taller than everyone else.

I have done tons of reviews of event decks since I began the SpartanNerd blog.  And I purchased all of them from the Tangled Web except for the French Event Deck.  Links to some of my reviews are below.

Born of the Gods Event Deck

So, back to the review!

This event deck starts off like any other.  With some inspiring information of the back.  This time what is different is the cover sleeve feels like an essential part of the packaging.

Removing the sleeve reveals this SICK box.  It has foil detailing.  I thought it might be a bait and switch kind of situation, like you might encounter in some Magic products, where there is some kind of cardboard spacer or something.  Nope.  This box is a solid two piece construction.  I think I will get a lot of use out of this box!

The top slides right off, and this is what your see.

This time you only have one piece of paper.  Finally, reason prevails!  No general guide to playing Magic.  A person doesn’t just walk into a Modern tournament without a deck, never having played Magic before, and drop $50+ on a product they don’t even know how to play! 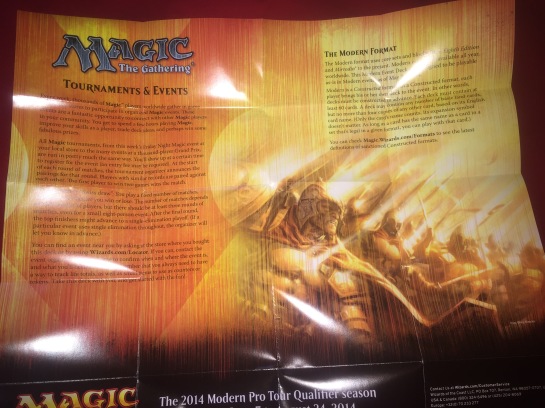 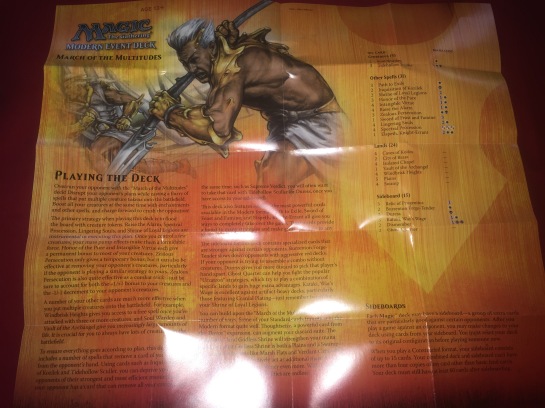 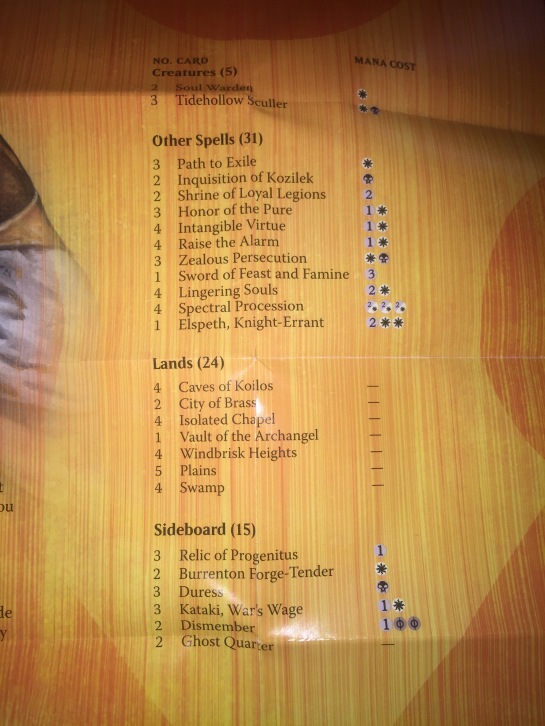 Here is the ever-important decklist.

I am going to go through the cards, with comments.  I have been hesitant to purchase this product because I had so many of the cards anyway. 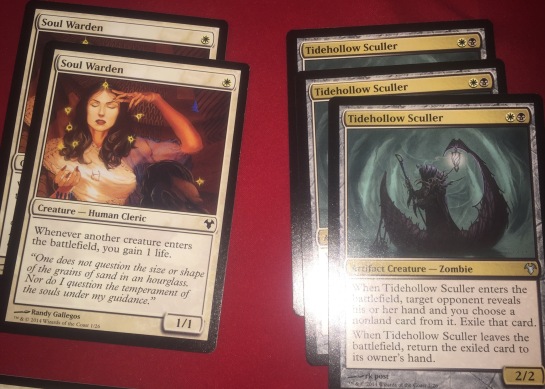 I had these cards already.  The Tidehollow Sculler is similar to the Brain Maggot.  He has stronger power and toughness, but at white and black in the cost, he is harder to cast.  I recently encountered Soul Warden when playing against a deck called “Soul Sisters.”  Basically, mostly female characters that amount to little advantages, as well as some “hate bears.”

Path To Exile…One of my main reasons to purchase this.  I recently won a copy.  I need them for my Esper Control Deck.  (I will cover that deck later.)

Inquisition of Kozilek.  Another big reason for me to purchase this deck.  Basically a Thoughtsieze effect, with a restriction that the discarded card has CMC of three or less.  Think how much better than Gitaxian Probe this is.  Of course, that is a cantrip, but still, if you put this in your Rack deck, or Waste Not deck, then you didn’t have to pay the two life for Thoughtsieze as often for the same effect.  And then you might know if it is worth Thoutsiezing.

Shrine to the Loyal Legions…the first true White Weenie card in this deck.  The Soul Warden and the Tidehollow Sculler are the only real creatures in this deck.  Everything else is spells that generate tokens.

Lingering Souls…a wildly fun card.  I already had four copies, and made that the base for my Esper deck.

Honor of the Pure…an anthem effect.  You could put the Spear of Heliod here for an even better effect, and with he added bonus of removal.

Intangible Virtue…this card was insane during the Innistrad block!  One of the best cards I remember from when I started playing Magic.

Spectral Procession…I only had one copy of this card before.  It is just right for this deck, which is really a white-based deck.

I didn’t have either of these cards.  I like how this Elspeth has a lower mana cost than the more recent one.  But she isn’t as good either.  She’s still pretty good.  She can suddenly pump one of your guys and give him flying.

The sword is broken.  It always has been!  I didn’t own this card either.  The Sword and the Elspeth are a good portion of the value in this deck.  Both cards are around $15 dollars apiece.

The lands…I already had four copies of Caves of Koilos.  This is being reprinted yet again in Origins, so I don’t see that much value.  I only had two copies of City of Brass, neither of which had as good of art as featured here.  So that’s good!  (I like City of Brass better than Mana Confluence.  Mostly for flavor reasons.)  I only had one Isolated Chapel, a buddy land.  I had Vault of the Archangel,  but I didn’t have Windbrisk Heights.  That land is a great source of on-the-battlefield card advantage in this deck.  Then there are five plains, all of the same art, and three swamps.  Same art.

This deck, like all of the event decks I have reviewed, comes with a sideboard.  The question is, what metagame is it addressing?  Here are some ideas.

Dismember can take out indestructible things.

Kataki, War’s Wage is meant to slow down Tron and Affinity decks.  Burrenton Forge Tender is meant to cost a burn player two cards.  (if you play both copies.)

Relic of Progenitus will shut down Lingering Souls and Unburial Rites.  It is also good against a mirror match, (concievable!)

And then Durress, a general thoughtsieze effect, but it can’t get creatures.  Good against Planeswalkers, burn spells, etc.

For the first time ever, I get to review how a deck plays before ever playing it!  I guess I’m a little late to the unboxing party!  I have faced this deck a few times in tournaments, with occasional slight modifications.

The way this deck works is, “overrun your opponent.”  Get lots of chump tokens on the field.  Use the Lingering Souls to block flyers.  Reach critical mass, get the sword on a flyer, and GG.  The Soul Warden works against burn.  The Intangible Virtue doubles the effectiveness of your creatures.  And then the anthem effects are very strong.

The Elspeth is dangerous.  Many times I have seen players substitute the newer Elspeth, Sun’s Champion.  And it’s possible to slide in a large creature, usually an angel.

I have beaten this deck a few times…probably more than I have lost to it.  It is weak against a turn one Thoughtsieze.  It has no response to Blue…it hopes to move faster than blue.  But you can easily remand these spells, and then prepare for them.  The creatures don’t have haste…so you get a second to remove them.  It becomes a race against green.  Sometimes it can beat green with a larger number of creatures.  And green doesn’t have too many flyers…

SpartanNerd Rating of the Magic the Gathering Modern Event Deck…

My colors are white and black.  This deck is mostly a “White Weenie” strategy, but it is a pretty strong take on it.  I don’t have many gripes about it in that respect.

The box is excellent.  It came with sleeves and an exclusive spin down counter.

If I have any complaint, it is that there are no foil cards in this deck.  I love me some foil.  But this really isn’t enough to take a point off.

So I am going to give it a 5/5.  It is the best event deck I have seen, except maybe the French thing.

Do you agree or disagree, oh Hub City Geeks?  Let me know in the comments!  And go by and visit the Tangled Web sometime!